Heathenry is not the same as, or part of, Neopaganism, period. It’s time to acknowledge that and move on.

There are, to be sure, some similarities, both theological and practical. We’re both polytheistic. We both find ourselves as relatively new religions (at least in a contiguous sense) in a culture that is dominated by Christianity and/or materialistic secularism, depending on who you ask. We’ve come into being and grown up mostly at the same time (in North America, at least). Some Neopagans worship Germanic deities, or at least occasionally include them in their rituals. A lot of newcomers, not knowing any better, find Neopaganism first and then eventually realize that Heathenry is an option. Both movements are struggling to gather the resources and numbers necessary to provide the sort of basic infrastructure that even the dirt-poorest Christian church in Appalachia takes for granted. Like a place to meet that’s not someone’s living room or back yard.

But culturally, politically, and on many issues of theology, we’re polar opposites, and it’s high time folks on both sides admit the chasm exists, shake hands, and walk away from a relationship that many on one side never wanted in the first place, and some on the other side are now saying, “wow, maybe this wasn’t such a good idea after all”.

Part of the problem stems from Neopaganism’s inherently eclectic nature. Over-enthusiastic Neopagans tend to want to bring everything that’s not Christianity, Islam, or Judaism under their “umbrella”, using the rationale that, since a Neopagan ritual could include Odin, or Kwan Yin, or Coyote, that makes Asatru, traditional Chinese religion, or Native American religion Neopagan, too.

The fact that this is a logical fallacy, and is often done over the strenuous objections of the practitioners of the faiths being dragged under the “Neopagan umbrella”, is irrelevant to the holders of the umbrella. It makes the Neopagans feel better about themselves (because they’re being “inclusive”), and allows them to artificially inflate their numbers. I actually wrote about this several years ago, as part of a larger discussion about pagan identity: Is there a “Pagan community”?, At least we all worship the Goddess, right?, and We’re all in this together.

I came to the conclusion that there really is no such thing as a Pagan community. I stand by that conclusion, and would take it a step further to say, “…and even if there were, Heathenry isn’t part of it.” 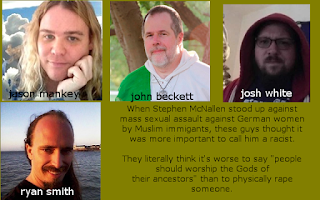 So when some BNN* says that There are Some People I don’t Want Under the Umbrella, my reaction is, FINALLY! We never wanted to be under your umbrella in the first place! Just because you rip off some deity names, start making up your own runes, and a take few myths from their ethno-cultural context† that we happen to share doesn’t make you us, nor does it make us a subset of you. And fuck you for trying to make us.

Similarly, when another BNN says Racism Cannot Be Tolerated, aside from saying, well, DUH! We’ve been fighting the folkish-vs.-racist fight since the 1970’s, where have you been? We would also say, you don’t really have any standing to tell us what to do, any more than you could assume that lecturing the Mormon Church on aspects of their doctrine would have any meaning to them whatsoever. I’m not the only person to have made this point.

Neopagan, you’re an outsider to us, and we value the inangard/utangard distinction. You tend to be overwhelmingly liberal politically, where we tend to be conservative/libertarian (there are exceptions on both sides, of course). You are eclectic to the point of appropriation or even cultural genocide, whereas we stick to our own ethno-cultural heritage. Historically, you’re based on 19th century ceremonial magic and an invented persecution myth, while we’re a reconstructionist faith that values academic rigor and, you know, historical sources.

But more to the point, you feel entitled to tell everyone else, especially those you have dragged under your “Pagan umbrella” or “Big Pagan Tent” or whatever, how they should practice their religion. You think slapping your label on our faith gives you the right to say that merely saying ancestry is relevant to religion is something to be not only condemned, but enough to ostracize people.

Riddle me this: How can you ostracize someone who doesn’t want to be part of your group in the first place?

You don’t see Heathens making pearl-clutching posts about the (very real) rampant pedophilia problem within Neopaganism, and demanding that prominent Neopagan leaders who either actively condoned it or turned a blind eye be tossed out. You know why? It’s not our business. It’s not our religion, it’s not our problem. It’s your house, your mess, and it’s up to you to clean it up. We might call out the specific instances as being horrific (which they absolutely are), but as a community, it’s not for us to “tsk-tsk” your community as a whole about it and start demanding outlawry. But Neopagans seem perfectly content to do so to us, and in the process side with SJW fanatics who erroneously conflate being folkish with being racist, making it all the harder for us on the folkish side to combat the real racists.

There are many, many evils in the world being done under the banner of religion, all much worse than saying “you worship the gods of your ancestors, and we’ll worship ours”. Where’s the Neopagan outrage over present-day Islamic slavery? Let’s see the calls from Jason Mankey or John Beckett insisting that king Salman of Saudi Arabia or king Hamad bin Khalifa Al Thani of Qatar be ostracized. Maybe it’s because you haven’t tried to drag them under your umbrella.

We don’t want to be under your umbrella. We never have, and we don’t now. Heathenry is one group of religions, and Neopaganism and Wicca is another (or a whole bunch of others; I really don’t care, any more than I care if Catholicism and Mormonism are different religions).

So please. Take your umbrella and…

† Yes, there are some who call themselves Asatru who deny the “ethno-” half of that word. I’ll discuss them in a separate article.

4 thoughts on “You can take your umbrella and…”