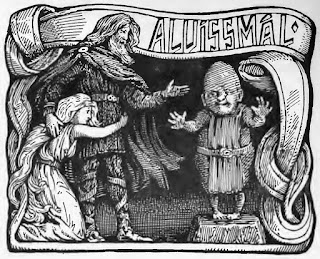 One of the more seemingly-straightforward poems in the Poetic Edda is Alvíssmál. It describes a dwarf, Alvíss (“all-wise”) who comes to Thor’s hall seeking Thor’s daughter as his bride. Thor distracts the dwarf with a contest of lore, asking him the names of various things “in all the wide worlds”, which the dwarf answers handily. However, the contest takes so long that the sun rises and the dwarf turns to stone (much like the arguing trolls turn to stone at sunrise in the famous scene from The Hobbit).

The tale is a little unusual in that it is Thor, rather than Odin or Loki, who is in the role of the clever trap-layer, but it’s usually seen as little more than an information dump, giving skalds a variety of kennings and synonyms to use in composing poetry.

What is interesting, however, is the way it lays out certain cosmological aspects of Norse myth. Each time Thor asks Alvíss to give the names of an object “in all the wide worlds”, and in each case the dwarf gives six synonyms. And not all of them are the same.

In the thirteen stanzas of the poem that deal with the lore-contest, each one gives the name of the subject of the stanza for both men and giants. But the other four “slots” are sometimes given to the Gods, the Vanir, Hel, and others, including the vague ginnregin (“great gods”). Since Thor specifically asks how the objects are called “in all the wide worlds”, the implication is that each of the creatures named in the stanza live in different worlds.

Several things become apparent. The use of the words ásum and goðum for “gods” would seem to be interchangeable, as they are not named together in any stanza, and together would mean the gods were named in all thirteen stanzas. But some of the named beings/worlds are more opaque. Who are the “sons of the gods”? They’re not the gods, since they’re named in stanza 16, which also names the goðum. They’re not men, or dwarves, or elves, or giants, either. So who are they? The same question can be asked of Suttung’s sons. Are they just a sub-group of giants? Then why are they named in the same stanza as the other giants?

So seven of the the “worlds” named herein include:

Which fit in well with what we know of Norse cosmology from other sources (and interestingly, jives with the “Seven Worlds” that are known to have made up the Anglo-Saxon cosmology, as opposed to the nine in the Norse). But that leaves:

Which are a lot more problematical, owing to the fact that we don’t know what these are references to. Does this mean that there are ten worlds total being discussed? Or is one (and exactly one) just a kenning for some other group? If two or three of those is a kenning for some other group (as we saw with ásum and goðum for “gods”), then we’re left with fewer than nine worlds. If we keep all three as distinct beings, we have ten worlds!

And, given the normal understanding, the worlds we’re trying to populate are Niflheim and Múspel/heim, neither of which seem conducive to any of those three named beings. And here’s another kicker – both of those are only understood as “worlds” (in the same sense that Asgard and Midgard are “worlds”) by Snorri, who was a notoriously unreliable systematizer.

I’m going to leave this investigation here for the moment. The key is definitely in the identity of those mysterious three groups of beings, and that’s a topic that deserves an article of its own.