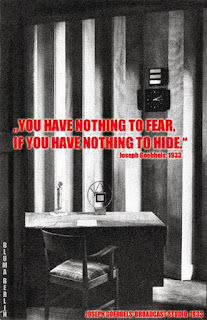 If you follow the news, or watch Jay Leno, you’re probably aware that there are a number of scandals a-boiling within the Obama administration right now. Two in particular should be extremely worrying to every Pagan and Heathen, regardless of where you are on the political spectrum (and even if you consider yourself “apolitical”).

I’m going to ask you to set aside your personal politics just for a minute. If you’re a Democrat or a liberal, try to forget it was Republicans and conservatives who were targeted. Just for a minute, I beg you, resist the temptation to assume it’s a good thing or justified simply because it’s conservatives being targeted.

The first scandal relates to the IRS. In the process of its acknowledged unfair scrutiny of conservative groups, the IRS started demanding donor lists, details on activities (including what books were being read in a book club), lists of interns, and, most recently, telling religiously-based organizations that they cannot take stands on particular issues, that they would not be permitted to exercise their Constitutional right to protest, and – most damning – that they were not eligible for tax exempt status because “your position is not based on facts.”

Let that last one sink in for a minute. We’re finally starting to get rid of local laws banning fortune-telling. Do we want to turn around and give that authority to the IRS?

Now, even if you have a problem with 501(c)(4) organizations engaging in politics, the point is that only conservative organizations were being targeted.

You don’t like the law and think it should be strictly policed? Fine. Do it equally. There are plenty of political liberal groups that could be scrutinized too.

The second scandal relates to the NSA. It has been alleged that the NSA and other intelligence agencies have been systematically collecting phone records, emails, and other information on American citizens (a program started under President Bush, but continued and expanded under President Obama, even though Candidate Obama condemned it). Even if the contents of those calls and emails aren’t examined (and there are rumors that that is the next shoe that’s going to drop in this scandal), the metadata thus collected lets the government build a complete picture of your associations, where you are at any given time, who you’re talking to, your social networks, and so forth.

Yes, they say it’s for security. But is security really advanced by logging the phone calls and emails of each and every person in the country? Is anything gained by logging your emails? Remember Benjamin Franklin’s famous quote:

“They who can give up essential liberty to obtain a little temporary safety, deserve neither liberty nor safety.”

On the one hand, we have a government that has proven its ability and willingness to build complete profiles about anyone, whether or not that person has been charged with a crime, has had a warrant against them signed by a judge, that would allow even the most innocuous transactions to come under the closest scrutiny. And if you think you’ve done nothing wrong and therefore have nothing to hide, you’re wrong.

On the other hand, we have a government that has proven its willingness to target individuals and organizations that it considers to be its political opponents. To the point where the IRS feels empowered to question those groups about the content of their prayers, and direct them to give up their Constitutional rights to freedom of speech and association, simply because the administration in power at the time doesn’t like what they have to say, and who they want to associate with.

The Wiccan Law Federation, a 501(c)(4) organization dedicated to representing Wiccans and Pagans in religious freedom cases, has its tax status re-evaluated by the IRS, and is told that they need to  present both sides of civil liberties issues equally, or they’re not fulfilling their educational mission.

Organizing for the Earth, a liberal 501(c)(4) organization that supports Democratic causes and candidates relating to climate change, has its tax status held up for two years, and is required by the IRS to divulge the names of all its donors, staffers, and to give up the passwords for its Twitter and Facebook accounts.

The New Jersey Wiccan Alliance, a purely religious 501(c)(3) organization, is asked by the IRS to provide complete records of the content of their prayers and whether or not they intend to stage any rallies or protests against military interventions in foreign countries, or against cover-ups of child abuse in the Catholic church.

Information is leaked concerning several high-profile Wiccan and Pagan bloggers and journalists who have been especially vocal in their condemnation and investigation of conservative Christian politicians. This information is highly embarrassing personally and professionally, and is used to discredit their reporting.

Lest you think that none of those things could actually happen, think again. They already have, to conservatives, Republicans, and Christians. If you think that there is going to be a Democratic majority in government for the rest of your life, you’re sadly mistaken.

Once the precedent has been set that political opponents are fair game, and the organs of government are fair instruments to investigate, track, and attack those opponents, then it’s only a matter of time before those instruments are turned against Pagans.

That’s why this needs to be stopped here and now. It’s not about snickering that government is persecuting folks you may happen to disagree with. It’s about making sure that the Christians aren’t snickering four years from now about the government finally putting those witches in their place. This is a weapon that shouldn’t be turned against anyone in our democracy, and we should not tolerate or encourage it merely because it hasn’t — yet – been turned against us.