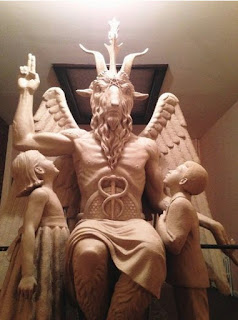 Needless to say, the Christians, particularly the Catholics (who apparently believe they have a lock on performing any sort of “Mass”) have gone completely apeshit. One group, called Tradition, Family and Property, has even set up an online petition to shut them down, because in their words the event “offends more than 1 billion Catholics worldwide, 200,000 Catholics in Oklahoma and countless more God-loving Americans. Sacrilege is simply NOT free speech.”

Indeed, it may be argued that “sacrilege” is entirely, and explicitly, the reason for the First Amendment in the first place. Precisely because “sacrilege” is entirely in the eye of the beholder, it cannot possibly be subject to censure or interdiction by the forces of the state. What is “sacrilege” to a Catholic might be perfectly innocuous to a Mormon, what is abhorrent to a Muslim might be positively required by a Christian, and… to bring this home… what is worthy of death under the Old Testament might be the entire religion of a Wiccan.

It has been said before, but it bears repeating, that unpopular speech is exactly the sort of speech that needs protecting. Because nobody tries to ban speech that offends no one. 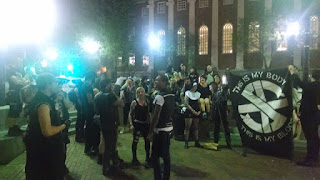 If anyone thinks that, given the freedom to shut down religious expression with which they disagree, the Catholic “Tradition, Family and Property” goons would be content to stop with the Satanic Temple, is simply deluding themselves. Given that sort of power, backed by the literal guns and economic force of the State, do you really think they would scruple to prevent an Asatru blot in their city? A Wiccan Full Moon circle? A druid camping event?

If you don’t think they’d use that power, you’re an idiot.

You don’t have to be a Satanist, or an Atheist, to see that the principle that a majority can shut down the religious expression of a minority, no matter how fervently they object to it, is simply intolerable to a society built on the principle of religious freedom. By involving the tools of force available to the state, whether they be the guns and handcuffs of the police, or the more subtle tools of higher fees, slower approvals, or outright rejections of requests, the heavy hand of the State cannot get involved in the business of choosing which religion is right, which is wrong, and which has the right to shut down another because it feels “offended”.

The higher principle of government neutrality when it comes to religion demands that the city ignore the petition. The whole point of the Bill of Rights is to protect the minority from the crushing will of the majority. This is a perfect case in point, and if it is allowed to proceed, I guarantee you neopagans and Heathens are next on the chopping block.

2 thoughts on “Why a Black Mass in Oklahoma Matters”