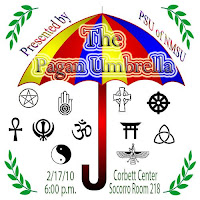 Asatru really is a different religion.

That might seem like a pretty obvious statement on the face of it. Of course we’re different. We’re not Christianity, or Islam, or Judaism. But that’s not really my meaning here. I’m really talking about the neopagan tendency to want to lump everything that isn’t Christianity, or Islam, or Judaism under the “pagan umbrella“. I’ve written about this before, but a couple of things really brought it to mind again lately.

First was a comment by John Michael Greer (former Archdruid of AODA), a fellow who seems nice enough, and certainly thoughtful and intelligent, but with whom I disagree on just about everything, but he encapsulated the thing about Asatru, vis-a-vis the rest of “the neopagan community” perfectly in a comment on one of his recent posts: 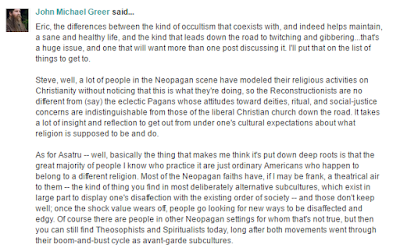 As for Asatru – well, basically the thing that makes me think it’s put down deep roots is that the great majority of people who practice it are just ordinary Americans who happen to belong to a different religion. Most of the Neopagan faiths have, if I may be frank, a theatrical air to them – the kind of thing you find in most deliberately alternative subcultures, which exist in large part to display one’s disaffection with the existing order of society – and those don’t keep well, once the shock value wears off people go looking for new ways to be disaffected and edgy.

I think that perfectly states the case. Of course, there are some Asatruar out there, especially the newcomers, who are out to honk people off, but most of them eventually grow out of that phase and become just ordinary folks who happen to worship Odin and Thor rather than Jehovah of Sinai. As another commenter on that same post put it, “On Heathenry — I had not really thought of it that way, but JMGs comments about its less theatrical appeal do ring true. Ever since the Heathens first started appearing in numbers at neopagan gatherings 20 years ago, they have always been a jeans-and-T-shirt crew.”

And that’s really true. We aren’t trying to be deliberately provocative, or counter-cultural. Hel, the political and social conservatism that many Asatruar maintain should be proof enough of that.

But another blogger (to whose blog I’m not going to link, as she regularly posts a lot of ignorant drivel and apparently whenever I link to her, her hits go up exponentially, and, really, just fuck her) recently posted a thing about the definition of Heathenry, and how it really doesn’t mean anything to do with Germanic religion or Asatru, and we’re all a bunch of idjits for thinking it does (and she tosses in a line to the effect that anyone who isn’t a Christian/Muslim/Jew is a Heathen, completely ignoring the negative historical connotations of the label, which I’m sure the Hindus and Amerindians and Yoruba really appreciate).

But in doing so, she also ignores completely the reason that those who self-consciously self-identify as Heathens, as opposed to Pagans, do so.

According to the dictionary definition, Heathen and Pagan are pretty much synonyms. “Country dwellers” or “bumkins” or “hillbillies” or something like that, with the added meaning of being non-Christian. So why do Heathens go out of their way to call themselves Heathens, and actively eschew the “Pagan” or “Neopagan” label, do so?

And that reason is that those of us who choose to self-identify as Heathens don’t want to be associated with those who self-identify as Pagans. And we choose the word “Heathen” exactly because it is a Germanic word (cognate to ON heiðinn), as opposed to a Latin word like Pagan (cognate to Latin paganus). By choosing to use the Germanic-derived term, we set ourselves apart. It’s a subtle thing, and certainly not a distinction that is recognized by society at large, but it is a conscious choice, and it is done for a reason, even certain bloggers are ignorant of the origin of the usage.

But to get back to the point; Asatru (and Heathenry as a whole) really is it’s own thing. We’re not just another branch of neopaganism, we’re really not just Wicca with Odin and Freyja instead of the Lord and Lady. We have our own unique political and social culture, our own unique theology, and our own unique internal disputes. The fact that we happen to have a couple of things in common with those who self-identify as Pagans (polytheism, magic, and… um… buggered if I can think of anything else).

We’re not part of your umbrella. We’re a unique religion, just like Jainism, or Mormonism, or a hundred others. We attend your events because there are some historical ties, and some commonalities (as mentioned above), but that’s not nearly enough to draw us under your umbrella.

Can’t we be friends without you trying to absorb us, and in the process, feel like you then get to tell us what we can and cannot do?