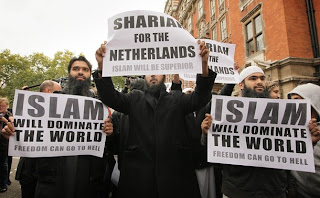 The recent events in Boston have pointed out, yet again, that there is a problem within the Muslim community that does not figure in most other faith communities. We don’t see many headlines that feature Mormons setting explosives at the end of marathon races, and the videos of Methodist neighborhoods cheering planes flying into skyscrapers in New York City are not to be found.

While many Pagans and Heathens in the United States and Europe are focused on Christianity as a perceived threat, the truth is that Islam is a much more real and present danger than even the most radical Christian sect aspires to be. And while there are indeed Christians who would like to see a theocracy established in the United States, they are a pitiful handful of fringe kooks, while there are hundreds of thousands, even millions of Muslims who support the aims of Islamist organizations who would impose their puritanical vision of Islam over the whole globe.

And this fact poses a particularly vexing problem for Pagans and Heathens.

One of the things, historically, that Islam was a reaction to was the perceived “polytheism” of Christianity. But even so, Christians and Jews are, as a group, given special status under Islamic Sharia law. In a Caliphate (the once and possibly future pan-Islamic state), Christians and Jews, and in some schools of Islamic jurisprudence Buddhists and Hindus as well ( all collectively called dhimmis) are allowed to practice their faith, as long as they do so unobtrusively and pay the jizya (a tax on non-Muslims).

This distinguishes them from Pagans and Heathens. We, as outright idolaters and polytheists, are not dhimmis. We are the mushrikeen. We are guilty of the crime of shirk, or worshipping Gods and Goddesses other than Allah. In saying that Odin is a source of wisdom, I am guilty of shirk under Islamic law, and by saying that the Goddess is a source of life, many Wiccans are, too.

“Shirk is devoting acts of worship to something or someone other than Allaah, such as one who seeks the help of the dead, those who are absent, the jinn, idols, the stars, and so on, or who offers sacrifices to them, or makes vows to them.” (Source)

As someone who maintains an altar to his ancestors and honors them in hall, who has idols to which I make offerings, and who makes oaths to the Aesir, I certainly fall into this category.

And what’s the penalty for shirk? What fate awaits we mushrikeen that doesn’t apply to the dhimmis?

“And when the sacred months have passed, then kill the polytheists wherever you find them and capture them and besiege them and sit in wait for them at every place of ambush. But if they should repent, establish prayer, and give zakah, let them [go] on their way. Indeed, Allah is Forgiving and Merciful.”

While a lot of effort has gone into trying to explain away this verse of the Quran by saying it’s taken out of context, the reality is that the context doesn’t mitigate this at all. Indeed, it only reinforces it.

So when we see these cowardly crimes committed by those who want to spread their vision of Islam across the world, don’t shrug and say that it’s a war between Islam and Christianity. Don’t make excuses, such that Christianity is the “worse problem”. It’s not. There are millions of Muslims who take that verse in the Quran to heart, and they are not at all above putting that edict into practice. The Quran is not our friend, and Pagans and Heathens should wake up to that reality before they really do get a chance to put its commandment into practice.

2 thoughts on “We are the Mushrikeen”