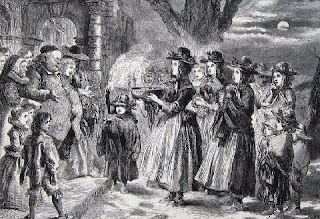 I confess I was inspired when I read this post on Patheos Pagan by Terence P Ward, discussing the ancient “visiting traditions” of Europe.

Back in a time when people lived in local villages, “visiting traditions” were a part of local religion during certain times of the year. These sorts of community rituals (to use the phrase of Sarah Stockton-Arthen in the article) are a great way to build community bonds, but unfortunately in our modern society, where members of the same tribe or even the same family might live an hour or more away from one another, the practical application seems difficult.

There are, in the Germanic tradition, several opportunities for these “visiting traditions” to be restored. The most obvious is during Yule, when wassailing (associated with the tradition of caroling) was done. There are also references to “going a-Maying” in England, the “May Feast” in Sweden (where the children of the village collect all the wrens’ eggs they can find, and bear them around in a basket, collecting ingredients from the various homes, until they have enough to make an enormous pancake, of which all share in the eating), and of course the various Mumming traditions that span the Germanic world in one form or another would qualify as well.

There are two ways that such a thing could be done. The first is to bring in the whole community, as Sarah Stockton-Arthen is described as doing in the article. Of course, that will almost necessarily mean that any explicitly Heathen quality of the tradition is lost, but that could be seen as a necessary evil in the quest to revive what is a community-based tradition.

For those interested in making it a more specifically religious tradition within an area, some degree of organization is going to be needed. First, the individuals who will be going and physically doing the visiting will need to be identified; this will likely be more a question of volunteerism than anything else.

What is more important, however, is that there are actually people at home to visit! 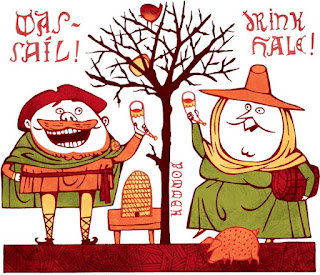 I suggest that a night be set aside, agreed on by a number of Heathens within a given area, wherein the visited agree to be home. The visitors pile into cars (most likely needed) and go from place to place to perform their rituals (their numbers might be added to as they hit more houses – all the better!). At Yule, this would most likely consist of singing traditional (or re-Heathenized) wassailing songs, and being given food and drink by those being visited. Other similar holiday traditions could be organized along the same lines.

The same principle could also be applied to other traditions, such as the perambulation of god-idols. Rather than being taken around in a horse-drawn cart for weeks, however, it could be done in a weekend, with suitable celebratory rituals being done as each home is blessed in turn by the arrival of the god or goddess.

I’m all about bringing back folk-traditions, and this seems like a fine one. The only issue is that in our modern go-go-go society, with sports practices and late business meetings, and a thousand other distractions, it’s not always assured that folks will be home to be able to enjoy and participate in such a visiting ritual. With a little organization and planning, though, I think it could be pulled off. I might just try to do so next Yule.