One of the more interesting figures from Norse mythology is Utgarda-Loki (Útgarða-Loki in the original Old Norse, and Utgarthilocus in the Latinized version), whose name means “Loki of the Out-yard“). Found in both Snorri’s Prose Edda and Saxo’s Gesta Danorum (“History of the Danes”), Utgarda-Loki is a giant with god-like powers. Some contemporary Heathens contend that Utgarda-Loki and Loki are the same being, owing to the similarity of their names and some of the details of their respective stories. However, the evidence for this is as illusory as Skrýmir’s bag.

The first story concerning Utgarda-Loki is by far the best known. As told by Snorri, Utgarda-Loki is a king among giants, a master of magic and illusion who sets Thor, Loki, and Thor’s servant Thjalfi through a series of tests which they all seem to lose. Loki is pitted against fire in an eating contest, Thjalfi races against the personification of thought itself, and Thor is not only made to feel fear while hiding in the giant’s glove (thinking it a hall), but drinks so deeply from a magic horn that he lowers the level of the sea, and picks up the World Serpent disguised as a cat. 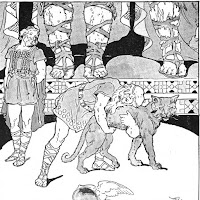 At the end of the contest, Utgarda-Loki admits his deceptions and disappears along with his magnificent castle, right before Thor can slay him with his hammer. It should be noted that this story is a fair indicator that Utgarda-Loki and Loki are two distinct individuals. They are in the same room as one another, after all. But of course, given the powerful illusions Utgarda-Loki is said to employ during the episode, that’s not a certainty. Too, if it were the case, it means that Loki/Utgarda-Loki is creating the whole incident specifically for the purpose of humiliating Thor, which undermines the “but Loki is a boon companion to the Gods early on” argument that many Lokeans make.

Let us press on to see if there are other differences that play out.

In Saxo, Utgarda-Loki is very different indeed. He is seen as a being to whom prayers for intercession could be made:

At first his [king Gorm’s] voyage was prosperous; later however he was battered by contrary gales until his comrades were expiring of starvation. When only a few were left alive he turned his thoughts to religion and resorted to offering prayers to the gods, reckoning that divine assistance was the only defense in their extreme plight. Finally, whilst the others were imploring the different heavenly powers and deciding that a sacrifice must be made to the majesty of various deities, Gorm solicited Utgartha-Loki, with combined vows and propitiations and thus obtained the beneficial spell of weather they desired. (Gesta Danorum VIII, Hilda Ellis-Davidson tr.)

Later on, Thorkil is sent on a journey to visit Utgarda-Loki in order to “gauge the opinion of heaven by consulting divine oracles”, when the king was concerned about the disposition of his spirit after death. What Thorkil found is a far cry from the vast palace that Thor and company found:

After this, with others in front acting as torch-bearers, he [Thorkil] squeezed his body into the narrow jaws of the cave and gazed on every side at rows of iron seats festooned with slithering serpents. Next, a quiet stretch of water flowing gently over a sandy bed met his eyes. When he had crossed it, he reached a place where the floor sloped downwards rather more steeply. From here the visitors could see a murky, repulsive chamber, inside which they descried Utgartha-Loki, his hands and feet laden with a huge weight of fetters. His rank-smelling hairs were as long as tough as spears of cornel-wood. Thorkil kept one of these a more visible proof of his labours by heaving at it with his friends til it was plucked from the chin of the unresisting figure; immediately such a powerful stench rolled over the bystanders that they had to smother their nostrils in their cloaks and could scarcely breathe. (ibid)

This is obviously a very different individual than the one described by Snorri. Is Utgarda-Loki creating the illusion of himself bound? Anything’s possible, but there’s nothing to suggest it in the text. Too, there’s nothing in that description that makes one think of an individual capable of stilling storms or granting wisdom relating to the afterlife. It is a very pitiable figure, in all.

That account has echoes not only of the description of Nastrond, the beach of corpses where murderers and oath-breakers go to a hall made of serpents’ spines and where poison drips from the ceiling, but also recalls the punishment of Loki at the end of Lokasenna (and in Gylfaginning), where he is bound with chains made from the entrails of his children, and set under a serpent whose venom drips on him, causing him to thrash and cause earthquakes. 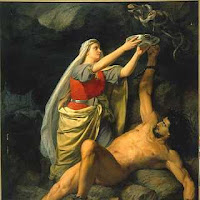 That said, the details are different enough to see that we are not looking at the same creature. Absent, for example, is Sigyn, the wife of Loki, who is said to hold a bowl over her husband to protect him (mostly) from the serpents’ venom. Too, the poisonous serpent dripping onto his face is missing in Saxo’s account, and there is no mention of the bound Loki being associated with a horrible smell.

Despite the surface similarities, especially in their names, it’s pretty clear that Utgarda-Loki is not the same individual as Loki.

However, there remains the fact that king Gorm offered prayers and made vows to Utgarda-Loki to calm the bad weather, and later seems to have taken on Utgarda-Loki as his patron god, perhaps in fulfillment of one of those vows made to spare his life and the lives of his men, when he looks to the giant for wisdom. Is this proof of an historical cult of giant-worship?

That’s a question I’ll take up in a later post.