In part one of this series, I tried to set the stage with some initial questions to frame the issue of how to approach reconstructionist religion (specifically, reconstructionist Heathenry, but applicable to different strains of pre-Christian religion). I’m not exactly going to follow the questions raised in that first post as an outline, but will be referring to them (and hopefully providing some answers) as I progress.

It is a fact that we do not have anything close to a comprehensive picture of what Germanic Heathen religion looked like. Prior to the arrival of Christianity, the Germanic peoples were largely illiterate, and had no tradition of written histories, commentaries, and so forth as did their Roman and Greek contemporaries. Much of what we do know comes to us from much later Christian authors, with some Christian and Pagan contemporary accounts, plus evidence of linguistics, archaeology, and other historical sciences.

This quite properly brings into question the accuracy, and therefore the usefulness, of those written sources. 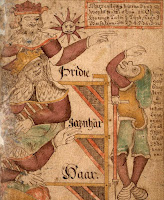 In terms of the Icelandic sagas, the question is most acutely felt. Written centuries after the fact by Christian scholars and scribes, there is fierce debate in academic circles about the historicity of each. Some are felt to be mostly-faithful historical accounts written down from stories passed down by oral tradition, some are felt to be complete inventions, or based on Continental or Classical stories. As a rule, when using saga evidence, the provenience of the specific saga being used must be evaluated.

Especially when dealing with pre-Christian practices, the question must always be asked, “is this an account of what Heathens did, or is this what Christians two centuries later imagine Heathens did?” Some Christian authors, such as Snorri and Saxo, also deliberately de-mythologized pre-Christian figures, turning them into mortals for purposes of telling the stories. The impact of such must be weighed when using them as sources.

Contemporary Pagan writers require similar scrutiny. Tacitus is the most well-known such source, with his Germania, written in the 1st century CE. But is doubtful that Tacitus himself ever visited the lands of the Germans, and it has been convincingly argued that his account was deliberately played up as a counterpoint to the failings he perceived in contemporary Roman society. There is yet another school of thought that holds that his descriptions of various Germanic tribes are actually a much-muddled account of Germanic views of the afterlife. Does this mean that Tacitus should be tossed out? Of course not. But as with the late and Christian-inscribed Icelandic sagas, care must be taken when drawing conclusions.

Written accounts can also be contradictory, which could point to a number of different issues. Perhaps there are two differing accounts, as we see with the tale of the death of Balder, recounted by Saxo and Snorri in very different ways.

Archaeological evidence is, of course, objective in and of itself, but the interpretation thereof is quite open to subjective analysis. It becomes too tempting to see Hugin and Munin in every bird-motif, and Loki in every bound figure. It should also be remembered that most scholars aren’t coming at the material from the point of view of practical application (i.e., a reconstructionist point of view), and it’s entirely possible that those of us who are looking for practical implications of things that puzzle scholars might come up with an insight precisely because we’re actually using the material. That is called experimental archaeology.

Similarly, modern scholarship tends to take certain things as assumptions. Question those assumptions. Go back to the original source material whenever you can and find out whether it actually says what the later scholarly interpretation says it says. As I’ve pointed out in the past, it sometimes isn’t the case.

All this said, I think we can distill down a first rule of reconstructionist religion:

Consider the source. Don’t take sources at face value, but weigh the reliability of written sources, and be open to new interpretations of archaeological and other physical evidence.