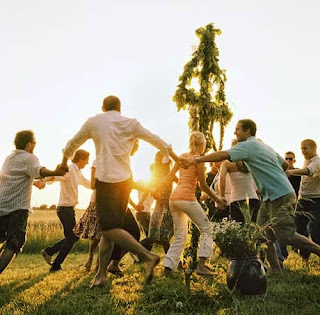 Midsummer is a holiday I choose to celebrate as an Asatruar. I do this not because, but despite, the fact that it is regularly included in the neopagan “wheel of the year” which places holidays at the solstices, equinoxes, and cross-quarter days. I also place it not on the actual date of the solstice, but on June 24th, St. John’s Day, which is the traditional day of celebration in Scandinavia (and, it seems, throughout the Germanic world).

While it is quite true that Midsummer is not one of the three sacrifices mentioned in Snorri’s Heimskringla and Óláfs saga helga (Winternights, Yule, and Summer Meal), the date was most certainly not unknown as significant to the people of the North. We see it mentioned in several places in the Icelandic sagas and other Old Norse sources, such as Grettir’s Saga, Grágas (the old Icelandic law code), the Rymbegla (where it is noted as a feast day), and the Saga of the Norwegian king Magnúss Erlíngssonar, wherein we find the word miðsumarskeið, which means “midsummer time”, in the same sense that people today still use the word “Yuletide” to mean a span of days relating to Yule:

When King Sigurd came south in Denmark in Schleswig, he found Eilíf Earl, and celebrated him well, giving him a banquet fit for a hero. That was at midsummertime.

Still, only Rymbegla specifically speaks of any sort of celebration specifically associated with the day (or the span of days), although King Erlíngssonar’s banquet for Eilíf Earl could certainly have been coincident with such a celebration.

If we move but a little southward, however, we begin to see a more definite pattern emerge. In the Vita S. Eligius (who lived in the 7th century in France, which at that time was well-entrenched in Germanic Frankish culture), we see the following admonition given to the people of northwestern Gaul:

No Christian on the feast of Saint John or the solemnity of any other saint performs solestitia [solstice rites?] or dancing or leaping or diabolical chants. 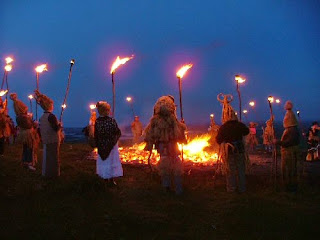 Here we see a clear linkage between the Germanic Midsummer (centuries of domination by the Franks had lent the land a decidedly Germanic cast, although a Celtic or even Roman origin for the tradition cannot be ruled out) and the performance of non-Christian celebrations. (As an aside, I will also note the reference to dancing and chanting/singing, which is a theme I’m developing as part of my own contemporary Asatru practice.) So, it is most certainly not a Christian invention to celebrate on the date, else Eligius wouldn’t have admonished against it.

I would also note that just because the holiday was not mentioned by Snorri does not mean it was not practiced, as his was not an exhaustive list, since we know of other attested celebrations such as Alfablót, Dísablót, Dísþing, Þorrablót, etc., not to mention the Anglo-Saxon celebrations mentioned by Bede.

That Midsummer is an important holiday in Scandinavia today should be news to no one. Celebrated with fires and drinking, it is a tradition going back at least centuries. I would argue it goes back considerably farther, based on the evidence in Rymbegla and Eligius. A quick glance at the Wikipedia page on Midsummer (never a good source for hard evidence, but illustrative nonetheless) shows traditions of bonfires and other celebrations associated with the day across the Germanic world and beyond.

In Sweden, the midsommarstång (“Midsummer pole”) functions much like a May Pole elsewhere, just moved back a month and a half (possibly explained by the differences in climate between Scandinavia and the Continent), and even in Elizabethan England the association of Midsummer with magic and the fey survived strongly enough for Shakespeare to write A Midsummer Night’s Dream around those themes.

It’s entirely possible that the celebration of Midsummer with fire, and its association with fertility, is something that isn’t completely Germanic in origin. However, I think the fact that it was noted and celebrated is pretty difficult to deny, and the form in which it is celebrated today in the Germanic and Scandinavian nations is as good as any, in the absence of any definitive evidence to the contrary.

And finally, a guide to Midsummer from the folks who do it best: