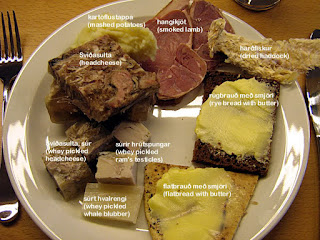 While the modern celebration of Thorrablót has been set to January 20 in recent times (having been revived in Iceland in 1873, although with nationalistic, rather than religious, overtones, and more recently and popularly in 1958, with an emphasis on rustic peasant food), the fact that the name of the month Thorri so closely aligns with it, as does the start of that month, that it is likely that the ancient celebration of the holiday moved with the start of the ancient month of Thorri; that is, the first Friday after January 18.

The celebration itself is attested in the Icelandic Sagas, although in a semi-legendary fashion to explain an already-ancient practice (Thorri here is a euhemerization of the god Thor):

Thorri was a noble king; he ruled over Gothland, Kvenland, and Finland. To him the Kvens sacrificed that it might be snowy, and that there might be good going on snow-shoes. That was their harvest. That sacrifice was to be at midwinter; and the month Thorri was called after it. King Thorri had three children; his sons were named Norr and Gorr, but the daughter Goi. Goi was lost and gone; and Thorri made a sacrifice a month later than he was wont to sacrifice; and they afterwards called that month in which this began Goi.

So, in essence, we have a sacrifice to Thor about a week after the conclusion of the Yule festivities. Given the nature of the fierce Scandinavian winter, having excuses to feast and see neighbors at this time makes perfect sense.

However, there is a bit more to the celebration that brings in Sif, the wife of Thor.

Known as St. Agnes Eve in England, the 21st of January is associated with young girls finding out who they will eventually marry was made famous by the poem by Keats, “The Eve of Saint Agnes.” Largely confined to England (there is even a 16th century doggerel that specifically says “Then comes in place St. Agnes; Day, which here in Germanie / Is not so much esteemde nor kept with such solemnitie.” ), this is a day deemed to be particularly significant for that specific form of divination:

Saint Agnes Day comes by and by
When pretty maids do fast to try
Their sweethearts in their dreams to see,
Or know who shall their husbands be.

The official story of the saint’s life goes that, as she was being dragged through the streets of Rome naked, as punishment for her fidelity to God, her hair grew instantly to cover her body, thus thwarting the pagans who wanted to rape her. I find in this story a distant echo of the story of Sif’s golden hair, although it is admittedly a thin connection. Interestingly, however, although there is no specific Scandinavian parallel of this practice, there is a variation of the story of the saint’s death which seems to be exclusive to England. In it, it is said that “her virginity was miraculously preserved by thunder and lightning from heaven.”

Especially coming the day after the Thorrablót, the connection between this day and Thor’s bride Sif become a little stronger, as thunder and lightning are of course associated with Thor, and are not found in the more southern versions of the story. Fortunately, there is yet another piece of evidence to support the idea that St. Agnes, at least as seen in Britain, is related to Thor’s wife Sif. That is Sif’s name itself, which literally means wife, and is used in compounds and verbs related to marriage. As Rudolf Simek puts it:

“The most likely interpretation is to see her as a goddess who originated as a complement to Thor when he played an increasingly important role as a god of fertility; the name Sif can be seen to support this view as Sif can hardly mean anything else but ‘relation by marriage’, originally therefore ‘the wife (of Thor)’.”

As such, I think we’re seeing something that was probably not originally a practice unto itself, but connected to the Thorrablót celebration. Although the date became attached to the feast day of St. Agnes, the fact that it falls in the same range as Thorrablót would definitely allow for it to be mapped to a similar figure, and ultimately separated. Over time, worshipers of Thor may dwindle, but maidens wanting to know their lovers’ identities endure forever.

For the magic to work in earnest, the would-be diviner must not be kissed on the lips by any man, and fast for the entire day. That night, after putting on clean night-clothes, she should say the following charm before falling asleep; “Now god of Love send me my desire.” Alternatively, the following prayer may be said (the following is a “Heathenized” version of the traditional prayer):

Now, good Sif*, play thy part,
And send to me my own sweetheart,
And shew me such a happy bliss,
This night of him to have a kiss.

Having done all that, her future sweetheart will be revealed to her in her dreams.

So to wrap up, what we have is a post-Yule sacrifice to Thor, which is made more significant by the addition of a divinatory rite for maidens looking for husbands. We already know that blót in general was associated with divination, but here we have the possibility of a much more specific divinatory practice, which fits in thematically.