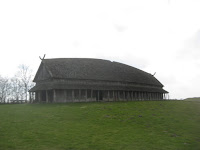 The circus sideshow that is the modern neopagan movement continues to whirl at blazing speed. There are accusations of atheist infiltration, Alt-Right infiltration, and even fundamentalist Christian infiltration. There are dire predictions of doom as the “end of the neopagan era” approaches, various neopagan factions tear each other apart with ever-growing invective, as the SJW’s become increasingly less tolerant of dissenting opinions, even to the point of accusing Dianic Wiccans of being transphobic for only wanting biological women in their rituals. Plus there’s the growing child sexual abuse problem within neopaganism, of which I believe only the tip of the iceberg has yet been sighted.

Is it any wonder we Asatruar actively resist being tagged with their “neopagan” or “pagan” labels? Why would anyone in their right mind want to get sucked into that morass of crap, ill luck, and politics?

But the follow-up question then becomes, why do I care? Why do I keep writing about it, and responding to neopagan writers?

The sad truth is that I do so because I must. In their zeal to attack one another, they sometimes splash their mud outside the scope of their precious “umbrella”, and it needs to be cleaned up by those of us outside their community. I try not to respond to their inter-community squabbles. I try to only respond when they feel compelled to attack my religion; Asatru (or Heathenry in general).

I’m quite content to let the monkeys fling their rhetorical shit at one another. When it hits me and mine, though, I’m going to take a rhetorical bat to said monkey’s head. 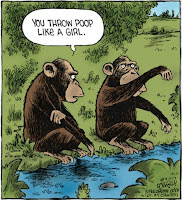 A lot of this stems from the stubborn insistence of some of them that, because we worship multiple gods, some of whom are also worshiped by some of them, and some of us go to the same events, that we must have more in common than we do differences. So naturally they assume we not only stand under the umbrella they thoughtfully hold out for us, but that we want to. In turn, they think that gives them the right to criticize what we, as Asatruar, do. Because in their mind, Asatru is part of the “greater neopagan community”, and thus, folks within that community have a right to criticize, and ultimately police, the goings-on within that community.

But they are oh so wrong.

Heathenry in general, and Asatru in particular, is, and always has been, its own thing. Founded across the world in the early 1970’s, a few years after modern neopaganism, we’ve developed in parallel with the neopagans. Because of the surface similarities, there’s been more than a little sharing and mutual support over the years. But where the neopagans mistook that for inclusion in a mutual community, the Asatruar couldn’t wait to let go and walk on our own. A few Asatruar continue to make the case for greater cohesion between the two, but they tend to be more inclined to disregard the core principles upon which Asatru in America was founded in the first place, and they might be better labeled as Germanic neopagans anyway. Not always, of course, but on the whole.

This is not a new argument between the Heathen and neopagan communities. I’ve been making the point since at least 2013, when there was a bit of a far-reaching discussion on the nature of “pagan identity” around the internet.

But the end result is that Heathenry, and Asatru in particular, is doing very well on its own, thank you very much. There are differences between groups, to be sure, and I’m not suggesting that everyone gets along in some idealistic paradise. But Asatru as a whole has matured, and grown, and pretty much maintained its cohesion over the years. We have tight-knit communities. We have international organizations that provide services that one normally associates with “mainstream” religions for their members, like making small loans for members in trouble financially. We are acquiring facilities, not because someone inherited some money, or cashed out a pension, but because our community as a whole stood up and supported the effort. We’re starting to become mainstream, and that’s a good thing.

Of course, some people are still singing the siren song of changing Asatru to be more like eclectic neopaganism. And in the process, they would destroy all of the things that makes Asatru unique. And ultimately, the failure of such a project comes down to the fact that Asatru and eclectic neopaganism are two different things. They’re not “other traditions” alongside Wicca within neopaganism.

Lucius Svartwulf Helsen says people need to just ignore the paganism of others. We Heathens have been doing that for going on forty years now, or at least trying to. Now if we can just get the neopagans to mind their own damn business, we’d all be happier. 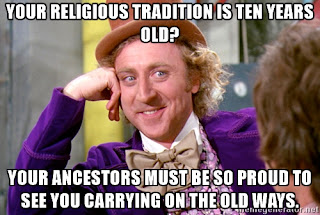 The problem with umbrellas is that someone is always trying to grab the handle and move it, so it only covers the people they think should be covered. That’s what Rhyd and his ilk are doing most recently. And they’re able to do so precisely because eclectic neopaganism means something different to each and every eclectic neopagan. There are no guidelines, no standards, no real foundation for community whatsoever. There’s just a thousand different groups doing what feels right at the time, forming, merging, splitting, and reforming like bubbles in a boiling cauldron.

By contrast, Asatru has a hall, built on a solid foundation of a shared cultural tradition, reinforced by an ancestral connection to one another. We’ve had our ups and downs, to be sure, but the line on the chart has always been pointed towards steady growth. We have a built-in resistance to demagogues and fly-by-night pushers of ideology precisely because Asatru has a common basis; the pre-Christian beliefs of the Germanic peoples of Europe. There is allowance for variation within that basis, but take away that core, and what you’re left with just isn’t Asatru any more. It’s… something else.

Neopaganism can keep their rickety umbrella, and keep it far away from us. We’re doing just fine in our hall, thank you very much, and that hall just keeps getting bigger.