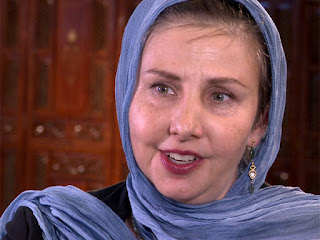 I was watching PBS’ Religion and Ethics Newsweekly, as is my wont, and they did an interview with Carla Power, author of If the Oceans Were Ink, which is apparently up for a National Book Award. I’ve not read the book, and this post isn’t about her book, but specifically about something she said on her PBS appearance (this quoted text starts at 1:38 on the video):

Narrator: She cited a verse from the Koran with the words “kill the idolater.”

Power: Its called “The Verse of the Sword,” and it’s… it was a favorite of [Osama] bin Ladin’s, it’s a favorite of jihadis who want to foment religious wars against non-Muslims. What often gets written out is the second part of the verse, which says “…but, if they repent, and do good, and give alms, and pray, then let them go on their way, because Allah is merciful.”

Really? That makes it okay?

What about the millions of us who don’t want to “repent” because of our “idolatry”? For us Asatruar, and Wiccans, and Druids, and myriad other types of Heathens and Pagans, idolatry is a part of our religion, as is polytheism. My own house has dozens of Gods and Goddesses represented in statues and other forms of art, and I have two God-poles in a sacred space on my property, and I make sacrifices to them regularly. To say nothing of Christians with their crucifixes, Hindus with their thousands of Gods and Goddesses, and so on.

We have no interest in “repenting” of our idolatry. But you said, on national television, that folks don’t have anything to worry about the “Verse of the Sword” that Osama bin Ladin liked so much, because the next sentence says, “but if you convert to Islam, and give up the faith of your ancestors, you can live.”

Convert or die. That’s the meaning of the verse you’re defending, by your own words.

I love my Gods, and my faith, just as much as you do, and “your sheikh” does. Saying “Allah is merciful because his followers won’t kill you if you give up your religion” is bullshit. And you need to understand that there are many of us who won’t meekly surrender to your sheikh’s god and his sociopathic insistence on total obedience.

Your sheikh, and the god he loves so much, wants to exterminate me because I am an idolater, and proud of it. You’ll forgive me if I’m somewhat miffed at the prospect, and at you, who is carrying his water and trying to defend that genocidal verse.

One thought on “The Verse of the Sword”