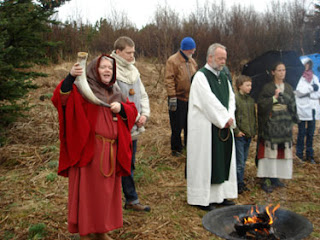 The rituals most typically celebrated by Heathens such as Asatruar and Theodsmen differ from those celebrated by most Pagans, particularly from those who are either Wiccan or whose rituals are inspired by Wicca. I thought it might be informative to present a brief outline of what Heathens do, and allow my readers to make their own observations on how these rites might be similar to, or different from, those with which they are familiar.

Naturally, these are broad generalizations, and no example is valid in all cases. But the broad points still hold.

The most-often celebrated rite within Heathenry is the blot (pronounced “bloat”). Taken from the Old Norse word blót, meaning sacrifice, the blot is the fundamental rite of giving to the Gods (or land spirits, or ancestors). The specifics of the blot vary wildly, and even within a given group can vary from one specific purpose or celebration to another. The one commonality is the act of giving, usually with the expectation that the offering will be reciprocated with favor from the being(s) to whom the blot is offered. (In some cases, a blot can be made after the fact, in thanks for something that the Gods or spirits have already provided.)

Originally, blót most often referred to an animal sacrifice, which should be no surprise given the agricultural nature of pre-Christian Germanic society. But the term was also used for a wide variety of votive offerings, and so too today do we see the term blot used for anything from the offering of food and drink; to valuable or home-crafted items such as woodwork, jewelry, or weapons; to animals. Offerings of food and drink are usually set on the ground, while more substantive offerings are either burned, buried, or hurled into the sea. Such offerings that are not immolated are usually symbolically “ruined”; swords are bent, etc. so that when they are given to the Gods, they can not later be reclaimed by men.

Some groups practice divination based on omens, rune-reading, or other means to determine whether or not the offering was accepted.

The other popular ritual within modern Heathenry is the sumble (pronounced “soom-bull” and often-spelled sumbel). Taken from both the Old Norse sumbl or the Anglo Saxon symbel, the sumble is ritual of toasts, almost always involving mead, ale, or some other alcoholic beverage*. Several examples of the order of the toasts is found in the written Lore, and even more variation is found within contemporary practice, but the general idea is that the words spoken during sumble are literally spoken into the Well of Wyrd, and have an impact on the world around us and our future.

This is one reason why some groups (particularly, but not exclusively Theodish) try to impose rules against wild oaths. Making an oath that says “I’m going to build a replica of the Temple of Uppsala by next Midsummer” is all well and good, but some feel that failing to keep such an oath harms the luck of all those present in hall when it was spoken. Others disagree, and feel that a broken oath is the concern of the oath-breaker and not those who were there when it was spoken into the Well.

While it is generally opened with one or more toasts to the Gods, and possibly ancestors and/or heroes, the toasts made at sumble can take several forms. The minne toast is spoken in honor of a departed ancestor. One can boast about things that one has done, and brag about things that one will do in the future. The latter is of utmost importance, as it lays the groundwork for one’s wyrd in the future. If one makes a brag about something that will be done, one had better do it, or the consequences (both supernatural and social) can be dire. It is also possible to offer poetry and songs to the assembled folk, give gifts (most often at Yule), and take care of other business of the folk that is intended to be of great moment and which should be spoken into the Well of Wyrd.

As a rule, Germanic religious ritual does not involve magic. There is no “raising of energy”, no “charging” of tools or substances with intent, no “dismissing” of entities invited, no “grounding”, and no active magical intent. That is not to say that magical practice is alien to Heathen practice: far from it (galdr, seiðr, and spá being prominent examples). However, it is generally segregated from those rituals which are more focused on the Gods/spirits and the community. Magical rituals can be done afterwards, of course, but they are generally still understood to be two separate things.

Feasting itself can be a ritual. There are also, of course, various rites that some groups can perform to mark births, naming of babies, bringing someone into a group/tribe, weddings, funerals, and the like. But on the whole, the blot and sumble are the “standard” rituals that one will find at a typical Heathen gathering.

* Many modern groups will substitute kissing of the vessel for actually drinking the sacred drink, for those who choose not to drink alcohol, very young children, etc. Others have a separate vessel of non-alcoholic drink that is blessed at the same time as the alcohol.