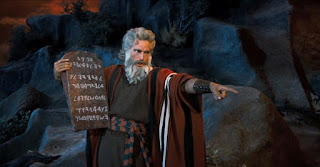 So a few years ago, in an apparent attempt to squander hundreds of thousands of taxpayer dollars defending against lawsuits which will inevitably result in failure for the state, Arkansas passed a bill requiring that the ten commandments be posted in front of the statehouse. The bill was sponsored by State Sen. Jason Rapert.

Yesterday the monument was installed on the State House lawn.

Hours later, at 4:30 AM, before the ACLU even had a chance to submit its lawsuit*, an apparently mentally ill man that professes “for our salvation we must have faith in Jesus Christ”** rammed his vehicle into the monument and smashed it into a zillion pieces.

Now, naturally nobody should go around illegally smashing property; I’m very much against it, and I hope this guy gets the combination of hospitalization and jail time that he needs and deserves. But honestly, guys in the Arkansas state legislature, this was a losing proposition from the start. I find it hard to generate a lot of sympathy. Let’s take a look at a few of the reasons why.

It doesn’t serve its stated purpose

State Sen. Jason Rapert, the Christian zealot behind this whole mess, has stated in the bill (and which was parroted by Christian commentator Todd Starnes) that the reason for putting the ten commandments on the Statehouse lawn is because:

The Ten Commandments, found in the Bible at Exodus 20:1-17 and Deuteronomy 5:6-21, are an important component of the moral foundation of the laws and legal system of the United States of America and of the State of Arkansas

Which commandments would those be? Is there a law in Arkansas about only worshiping Jehovah of Sinai?

Will the police arrest anyone making a graven image?***

Christ on a Stick! Is there a law against taking the name of the “lord” in vain?

Will the Committee for the Promotion of Virtue and the Prevention of Vice (Arkansas Division) beat people who keep the Wal-Marts and fast food restaurants in Arkansas open on Sunday?

If a child tells their mother to go fuck themselves, will they end up in juvie?

Killing, yeah, and stealing, too, but both of those are hardly unique to the Ten Commandments, Christianity, or Judaism. In fact, I can’t think of a culture that didn’t prohibit those, including, especially, pagan cultures, so it hardly qualifies as an example of the ten commandments being “the moral foundation of the laws and legal system”.

Adultery? Well, it’s illegal in the UCMJ, yes, but you won’t get locked up for it normally.

False witness? Yup, we’ve got perjury laws on the books, but see above about killing and stealing.

Coveting? That might be something Oceania’s Thought Police might like to be able to arrest someone for, but in this country, it’s not against the law to think. Yet.

So no. Nothing in those precious ten commandments has anything to do especially with “the moral foundation of the laws and legal system.” In fact, if anything, our current system of law has much more to do with Germanic common law, inherited from the Anglo-Saxons and Vikings, via the English colonies. You know, juries, personal rights, due process, that sort of thing that most people would normally associated with “the foundation of … the legal system.”

Most people don’t realize that there are a lot more than one version of the ten commandments out there. Jews, Orthodox Christians, Catholics, Lutherans, Calvinists, they all have their own variations on the theme. You pick one for inclusion in an officially sanctioned and endorsed display by the state, and you explicitly establish whichever denomination of Christianity you picked (and let us not even consider for a moment that Rep. Rapert chose a Jewish version, because he didn’t) over all the other ones, and all the Jewish denominations, you didn’t pick.

Unless you carved one with a zillion footnotes with alternate versions, wordings, and so forth. But That doesn’t make for a good, pithy, “my religion is what’s important, not yours” statement, which is exactly what this stupid monument was intended to do.

It says “screw you” to the non-Christians

Pretty much by definition, if there’s a monument that has been explicitly established by a state government, placed on government property, and that monument not only has the historical context of a particular religion, but actually says:

I AM the LORD thy god

Thou shalt have no other gods before me

You ain’t my “lord” Jehovah of Sinai. You’re just a jumped-up desert god from a foreign folk who somehow managed to glom onto a winning formula to lie to people and tell them you’re the only god out there (although Asherah might have a word or two to say about that). And then turn right around and contradict yourself by admitting there are other gods. You might be a fine god for the Jews, but you make a piss-poor one for everyone else.

And the legislators in Arkansas, not caring at all, of course, stuck their finger in the eye of every Buddhist, Hindu, Jain, Atheist, Shinto, Amerindian religious follower, Wiccan, neopagan, and of course Asatruar out there, among many others. But they don’t care, because there are more Christians than the rest of us put together.

Fortunately the law is on our side, and the United States provides for protections against the sort of religious triumphalism that Rep. Rapert and his supporters were trying to impose. The reason we have individual rights and limitations on the powers of government is precisely to circumvent the sort of mob-rule mentality that says “there are more of us, so we can do what we want.” It is precisely to protect the rights of the minority against the tyranny of the majority. Republicans used to be all about that sort of thing. I hope they get back to that core principle. 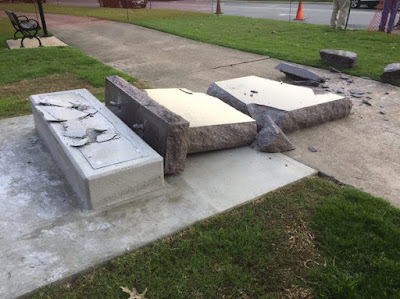 * Which would win because, unlike the Texas monument it attempts to emulate, this hunk of granite isn’t in the context of a whole bunch of similar displays from a variety of religions and sources.

*** Consider here the irony of making a graven image of the Ten Commandments. Ahem.

3 thoughts on “The Ten Commandments”