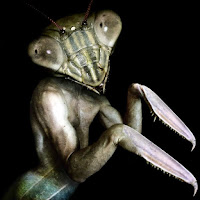 I happened to stumble across something today which actually makes a lot of sense, given my previous thoughts and practices regarding what I regard as the “goddess of place” of the Musconetcong River, which flows right past my home, and to whom I have taken to making offerings in the Germanic fashion. On occasion, the goddess of the river has shown herself to me as a white heron.

Apparently, several fishermen in the Musconetcong have encountered what they describe as a “mantis-man”. The encounter was apparently featured on one of those cable cryptozoology shows, as well. Here’s the first, and more detailed account:

Although the water was clear, there had been heavy rains the past couple of days. We should not have been out there; the river was “smooth” but the current was exceptionally strong. I was leaning backwards and digging my heels into the the gravel but the river was still kicking me along pretty good. Sketchy navigating.

Please know, I am “privy to the paranormal” and always have been. Shadow people, ghosts, whatever. But what I encountered that day was not Spirit. It was a “biological”, living creature. But it disappeared into thin air almost as soon as I saw it.

… I just “Caught it”. Movement out of the corner of my eye to my left and there it was—
Humanoid. Tall. 6 foot at least –no reference points– but I sense 6’6″ – 7′. Moving away from me back up the bank. (I am chest-high in the river) The first thing I see was the ‘grasshopper’ thigh, but bending forward like a human. Then the whole form. He is looking at me over his shoulder, moving up the bank, astonished, amazed. What, that I am in the water in a strong current, that I can see him? But yes we lock eyes and this creature is astonished– I get the sense that he can’t believe I am in the water, that he can’t believe I have seen him, that I am not perturbed at all– something of all three, I still don’t know– just astonishment and he is actually trying to get away from me and the water!

Triangular Head. Huge, slanted black eyes. Just like a Praying Mantis. It’s whole body was gangly, nobby, ((Nobby!) but you could still sense it was powerful, and no– I would not say it was a “Big Bug”– it was definitely humanoid despite the mantis/insect qualities. …

No bank to speak of on the developed side, but the sloping bank on the rural side was high (ten feet?) A strip of trees about 10 – 20 yards thick separated the river from the fields beyond, but there was the occasional gap/path, each about 20 yards wide that allowed clear access to the river. …

When I saw The Mantis Man, it was in one of these gaps, moving back up the bank towards the fields, looking back at me over its left shoulder. About 15 – 20 yards away.

So understand that it was several feet above me (I looked up at it) and framed clearly against that blank/white sky. Like a full ghost apparition, it was indeed clear but nevertheless nearly transparent and fading fast. Then it “evaporated” mid-stride.
Again, I stress the strong impression that The Mantis Man was cloaked and I “caught it” just right; it abruptly found itself against a “new”/blank background and was adjusting quickly. No, I do not believe it “slipped” into another dimension/plane. 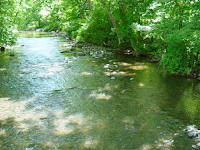 I detected movement and first saw that strong left thigh, (and strong right calf) then the whole thing and immediately those eyes/face. The whole encounter was only a couple of seconds. I can not tell you with any strong certainty what its feet or hands looked like –I wasn’t looking there– but I can tell you that its arms were “normal”, and not the literal Mantis forelegs I have recently seen in drawings of these “Aliens”.

Apparently about a year ago my friend and his brother were down at Stephen’s State Park fishing right around dusk. During this time, while his brother was roughly 50 yards downstream fishing, he said he felt this strange vibration in his right ear and from that he turned and looked to the right. When he turned and looked to the right he said he saw this 6 to 7 foot praying-mantis-looking-man… just standing there and unable to believe that he could see him. He said the creature was black and gray and to be quite honest, the way my buddy was telling me this story, I was having a tough time. I know he saw this thing… because I could see it in his face.

Now, I don’t believe in aliens visiting our world or anything, but I do think that at least some of the “alien” sightings in recent decades might be nature spirits (and I’m not the only one). In centuries past, when people saw these sorts of things, they knew them to be the land-wights, brownies, elves, etc. that they knew of from the stories their parents and grandparents told them. In today’s world, in the absence of that sort of oral folklore, we necessarily interpret them in a way that makes sense to our modern sensibilities. In this case, aliens. 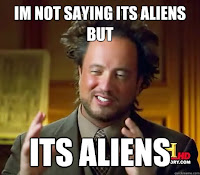 Still, it’s interesting to see this sort of thing focused on an obscure river in northwest New Jersey, coincidentally the same one in which I’ve long sensed the presence of a very strong land-wight that was probably known to the Lenape Indians as well. I’ve certainly never seen anything mantis-like, and there’s no telling whether that’s the true form of the spirit, just a form it took on, or whether these reports have nothing to do with the land-spirit I know, but it’s an interesting bit of data nonetheless.
I’ll certainly keep an eye out for anything particularly strange the next time I visit the river and make cult to Her.