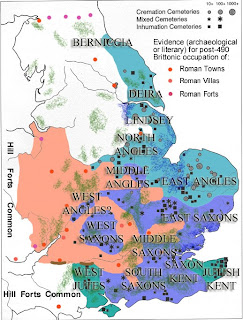 The innangarðs (ON) is all that is within the nine worlds. Outside is the útangarðs (ON), the wilds where man has no control. Thus you have the nine worlds, and then Útgard; that outside the sphere of both Man and the Gods (as well as the giants, elves, and dwarves). It is a place where creatures such as Útgard Loki dwell.(1)

This is most obviously seen in more tribalist forms of Heathenry such as Théodish Belief, where the distinction between a member of the tribe and an outsider is sharply defined and has implications for both ritual and social interactions. It is also seen, however, in most other forms of Heathenry, where the basic group, the “kindred”, is very specifically defined. Whether membership in the kindred is formalized by the taking of an oath, or by the consensus of the other members of the group, or some other formula, we see a drawing of the boundary. One is in the group, or one is not. To once more quote Swain Wodening on the subject:

The ancient Heathens applied this reasoning to their social units as well as Mankind as a whole. They viewed the world of man as a farmstead with its enclosing fences. All inside the world of Man was inside the fences. This applied to tribes, who were viewed as their own enclosures. The law of Mercia did not apply to someone from Northumbria even if the crime was committed in Mercia. Each tribe was its own innangarðs.(2)

This is not to say that there is a velvet rope around every Heathen group. The major international groups have a membership that is obtained by paying dues. But where it counts, in the everyday local groups, there is almost always a standard that must be met in order to become a “member”. More than just showing up to a ritual.

Too, it should be remembered that the distinction between the innangarðs and the útangarðs does not mean that guests are unwelcome at Heathen events. Far from it. Théodish groups, generally considered to be on the more exclusive end of the spectrum, specifically have “goodfolk”; friends and guests of the tribe who, while not members, are treated with great respect and goodwill when they attend a gathering of the tribe.

The situation is somewhat analogous to initiatory faiths such as Wicca, but relies more on social cues than initiatory rites. The thought is generally less “you have worked hard and earned the right to participate in our rituals” and more “we like you, you fit in well with our group, and we are ready and willing to take our social bond to the next level.”

As might be inferred, the line between innangarðs and útangarðs is a permeable one. The lore is replete with examples of individuals who were adopted into a tribe, raised as a foster-child in a tribe, or married into a new tribe. But even so, the differences between the in-group and the out-group are best thought of not as a single line, but as a bulls-eye. In the center of the bulls-eye is you and your immediate family. The next ring is your extended family. Then your tribe. And so forth. This is one reason (among many) that the majority of Heathens don’t tend to associate with or identify with neo-Pagans. They are simply way too far out in the rings of the bulls-eye to warrant a lot of attention. There are a lot of folks who will be closer to the center of the bulls-eye, regardless of faith. The relationship is both subtle and situational, but the distinctions between the “in” and the “out” are very real.