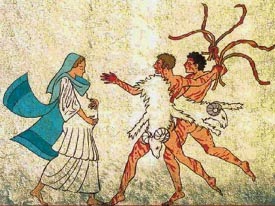 Asatru being a reconstructed (sort of) religion, the question of historicity often comes up. Historicity is the historical accuracy of a given thing, person, or idea. Since no one at the time bothered to comprehensively write down just what it meant to worship the Germanic gods, goddesses, spirits, etc. before the coming of Christianity, we moderns are forced to make do with the pieces of evidence that have survived the past millennium or so.

As such, there are some things that we can say with some certainty are very accurate, some that are on more shaky ground, others that are even less likely to be historical, and some that are cheerfully and self-consciously modern inventions. Of course, for those who do not follow a reconstructionist faith, such as Wiccans, these considerations are pretty well irrelevant. But there are quite a number of us who follow a more reconstructionist faith, such as Asatru, the Religio Romana, Hellenismos, Celtic Reconstruction, and more, and for us the question of the historicity of some part of our practice can be very important. For one thing, it allows us to “triage” things; when presented with contradictory ideas or practices, for instance, I will always defer to something that’s higher, and more historical, on the scale.

One thought on “The historicity spectrum”