In my previous post on this month’s blogfest subject, I laid out the case that adoption of elements of one culture by another is not necessarily a bad thing. Now I would like to address the flip side; when cultural appropriation can be a negative.

The most obvious example of the dark side of cultural appropriation is the so-called “plastic shaman” phenomenon. This refers to people claiming to represent a particular culture, religious tradition, etc. without actually having any legitimate connection thereto. Although it originated in relation to people posing as having Amerindian backgrounds, the term is more broadly applied to a variety of different cultures and traditions.

The plastic shaman can be dangerous on at least two levels. First, it represents a potential danger due to a lack of knowledge and/or experience of the practice involved. Most famously and recently, New Age “guru” James A. Ray was found guilty of negligent homicide when three people died in a sweat lodge ceremony he was running. Had he truly had a firm and legitimate background in the practice, it’s very possible those deaths could have been avoided.

Plastic shamans can also do damage to the cultural traditions whence they take their “shtick”. Because they lack the background, experience, and knowledge necessary, they themselves are often ignorant of the details concerning the practices they claim to know. Their misconceptions can easily be transmitted to others (who have no way of knowing any better) as “genuine” and thus diluting the value and nature of the actual practices. 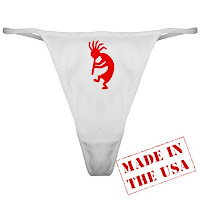 In the United States, we see this a lot with Amerindian practices and images (spirit quests, rain dances, dream catchers, Kokopelli, etc.), yoga, and even runes. When these are presented as dumbed-down for easy mass consumption, they become cheapened in the public consciousness, and lose much of their esoteric and spiritual significance. The perception becomes that there isn’t any spiritual depth to such cultures, since “everybody knows” their practices are just fluff.

When someone, whose only exposure heretofore has been this watered-down version of what is actually a deeply spiritual practice, is exposed to the real thing, they are prone to be confused, disappointed, and sometimes even refuse to believe that what they’ve been exposed to before was just quackery.

Another related negative of cultural appropriation is the secularization and overall cheapening of symbols, practices, and other elements of culture that have profound significance to that culture. When children can buy “Indian brave headdresses” in any dollar store, when rune pendants are hawked at every Renaissance Fair, and deities from nearly every pantheon show up as comic book superheroes, the sense of awe and mystery around the spiritual sides of those items evaporates. It is very much a way of saying “isn’t it adorable that you actually think Thor exists; he’s just a comic book character!”

That’s not to say that an Asatruar can’t be a comic book fan, nor a Soux enjoy reruns of F-Troop or Gunsmoke. But we should be aware that borrowing from other cultures what they deem to be sacred can, in many cases, be at best insensitive and at worst destructive. When the spiritual cache of a thing is diminished to increase its commercial or pop culture value, real harm is being done.