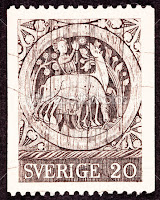 Now we move on to the second day of Yule.

As we saw last year when I compared the traditions surrounding the feast of St. Stephen as celebrated in the North, there are a number of connections between the figure and the god Freyr, specifically the connection to both boars and horses. In England, St. Stephen is the patron saint of horses, also echoing the association of Freyr with horses, and an English folk-ballad about Stephen reinforces his connection with the boar’s head feast of Yule/Christmas:

“Stephen out of kitchen came,
With boarës head on hand,
He saw a star was fair and bright
Over Bethlehem stand.”

Some interesting Swedish pieces of folklore from the 19th century conflate “St. Staffan” with the founder of the Archdiocese of Uppsala of the same name, where he is said to have been the first to preach the gospel there, and denounced its Heathen practices, only to be cast into prison and then escape to finally meet his fate as the Christian ur-martyr. While the echo of the association with Uppsala is interesting, much moreso is this legend that clearly relates St. Stephen to the god Freyr: 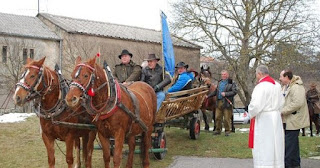 A saying is still common amongst the people, that once every week he visited them all, and proclaimed God’s word. In the performance of this duty, he folowed the course of the sun; so that in the morning he rode from Norrala, where he dwelt, passed the night at Arbrä, and from thence continued his journey to Järfsö, and Ljusdal, Sundhede, and Nordanstigen, and returned home within the above-named time*.

Helsingland was in those days, as at present [1870] celebrated for its good horses, Staffan had a great love of horses, understood their treatment, and had always give with him wherever he went. When one was wearied he mounted another, and in this manner traversed the country. [He was killed by the Heathens and interred at Norrala.]

For a long time after the martyr’s death, his friends and the Christians in the country were accustomed to meet at this his place of burial, which to them was looked on as holy, when they prayed together, and strengthened each other in faith and love. But when Christianity at a subsequent period began to lose its original simplicity and purity, the monks, profiting by the reverence the people entertained for the spot, seduced them by pretended miracles and prodigies to make offerings, and seek cures for diseased animals, especially horses, and also to worship St. Staffan, who, however, was never canonized, as their patron saint. (Peasant Life in Sweden, p. 204-6). 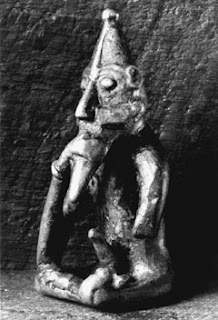 Here we see not only the association of “Staffan” with horses, but also an echo of the passage from Ynglingatal, which describes Freyr’s establishment of Uppsala as a cult center, and the continued worship he enjoyed at his burial mound after his death:

Frey built a great temple at Upsal, made it his chief seat, and gave it all his taxes, his land, and goods. Then began the Upsal domains, which have remained ever since.  Then began in his days the Frode- peace; and then there were good seasons, in all the land, which the Swedes ascribed to Frey, so that he was more worshiped than the other gods, as the people became much richer in his days by reason of the peace and good seasons. His wife was called Gerd, daughter of Gymis, and their son was called Fjolne.  Frey was called by another name, Yngve; and this name Yngve was considered long after in his race as a name of honor, so that his descendants have since been called Ynglinger.  Frey fell into a sickness; and as his illness took the upper hand, his men took the plan of letting few approach him.  In the meantime they raised a great mound, in which they placed a door with three holes in it.  Now when Frey died they bore him secretly into the mound, but told the Swedes he was alive; and they kept watch over him for three years.  They brought all the taxes into the mound, and through the one hole they put in the gold, through the other the silver, and through the third the copper money that was paid. Peace and good seasons continued. (Ynglingatal chapter 11)

The key elements being the worship of Freyr/Staffan at his grave, specifically connected with the offering of money (the monks’ profit in the Staffan legend, and the taxes in the mound in Ynglingatal).

Suffice to say, I think the identification of the Northern Staffan/Steven with the Heathen Freyr is sound. That said, what does it mean? What sorts of practices do we see on St. Steven’s Day that might be applicable to Heathen worship? It turns out, there are quite a few, mostly involving horses, as one might expect.

One cares for the horses of some stranger in some not-close village, or even another parish; grooming, feeding, watering, rubbing down, etc. The deed is expected to be repaid with a fine breakfast.

Horses are given the leftover ale from the previous night, and bled in order to make them healthy (bleeding was regarded as a healing practice at the time).

A procession, known as Staffanskede, is also undertaken, where mounted youths take off before dawn and go from village to village in a sort of race, singing the Staffansvisa from house to house, in return for which they are to be treated to ale:

The custom recalls other visiting traditions, such as caroling, wassailing and the like. The Swedish lyrics of the carol can be found here. If I find an English translation, I’ll post it as well. But I must say I like the music; it’s quite haunting in this rendition.

On the evening of St. Staffan’s Day, there are games, music, dancing, and of course more feasting.Lloyd also tells us of a custom involving bringing in a Jul Baske; what we now know as a Christmas Tree.

This, then, is the second of the three days of Yule. Horse-racing, visiting and caroling, feasting and dancing and music.

And the third? I think we found the third day of Yule in our exploration of St. Knut’s Day. The last of the food is eaten and drink is guzzled, the decorations are taken down, there is guising in spirit-costume to scare the neighbors, and a ritual drama is enacted to cap the celebration.

When the Yule celebration was merged with the Christmas holiday, it necessarily lost two of its three days (but Christmas itself was extended into twelve, to match their obsession with the number, between Christmas and Epiphany, and since become our Twelve Days of Christmas). What was Knut’s Day, until it was moved yet again to prevent confusion with the “more important” dates of the Christian calendar. The third day of Yule. 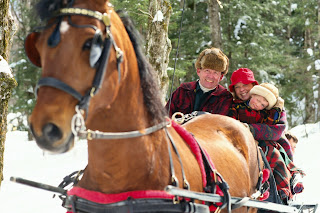 And there we have the cycle of holidays leading up to Yule. I may well have a few more posts on specific topics (because even with all this, I’ve only scratched the surface), but I think we have a very solid foundation for a plethora of celebrations designed to discourage disobedient children and reward the good, mark the triumph of the sun over the longest night of the year, the changing of the year itself, and the middle of the winter season as people experienced it.

I personally think that’s a whole lot more worthy of celebration than cramming everything into a single day. Our gods and ancestors deserve a lot more.

_____
* It should be noted that all the places named are in or near Gävleborg County, Sweden, just north of Uppsala, which largely overlaps Halsingland. We’re talking about a very small district within modern Sweden, which just happens to be just north of the highest concentration of Freyr-related place-names in Sweden, around Uppsala.