What a wealth of winter traditions we’ve uncovered so far, leading up to Yule: 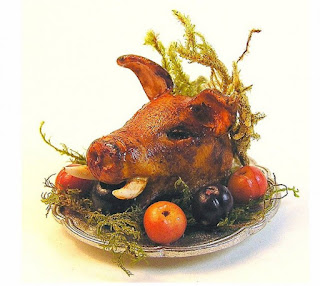 And now we come to the mid-winter sacrifice and celebration itself; Yule. Specifically, sónarblót, or “Son’s sacrifice” (which is interesting to contrast to Mothers’ Night earlier), which takes place on the first night of Yule. The practice is specifically described in Hervarar saga ok Heiðreks (ch. 10):

And they would sacrifice a boar in the sonarblót. On Yule Eve (i.e., the first evening of Yule) the sonar-boar was led into the hall before the king; then people laid their hands on its bristles and made vows.

It is also mentioned in one of the poems of the Poetic Edda, Helgakviða Hjörvarðssonar (IV):

Returning home alone from the forest on a Yule Eve, Hedin met a troll-wife riding on a wolf, with serpents for reins, who offered to attend him, but he declined her offer; whereupon she said: “Thou shalt pay for this at the council.” In the evening solemn vows were made, and the son-hog was led forth, on which the guests laid their hands, and then made solemn vows at the council.

This recalls very strongly the English tradition (since exported to the United States and elsewhere) of the Boar’s Head Feast, where the cooked and garlanded head of a boar is brought into the hall to inaugurate the celebration, accompanied by specific carols, dating back to at least the 15th century (although the ceremony itself goes back to at least 1340):
The association of the boar with both Freyr and Yule is well-known. Freyr is said to ride a golden-haired boar, named gullinbursti (“golden-bristles”). and feasts of pork around the solstice (originally associated with Yule, and transferred to the new Christmas holiday) were traditional well into the Christian era. In modern Sweden, boar-shaped cakes are a traditional Christmas dish, and Christmas Ham is a staple across Scandinavia. Even as late as the 18th century, December 17th was called Sow Day in the Orkneys, and the best sow of the herd would be slaughtered (add 8 days for the calendar conversion, and Sow Day becomes Christmas Day, upon which Yule traditions were mapped during the conversion process, as we have seen). 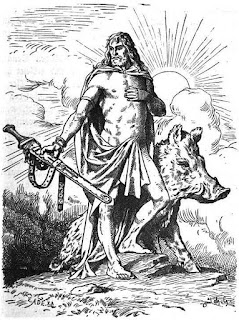 The winter solstice sacrifice was associated with the god Freyr. According to Ynglinga Saga (ch. 8), the mid-winter, or Yule, sacrifice was made “for a good crop”:

Remembering that “the middle of winter” here is describing the actual climactic winter, not the astronomical solstice, which in reality happens way before the point where there are as many colder days behind it as ahead of it. So, approximately the middle of what we call January.

While Gylfaginning (ch. 24) makes it plain that it is in fact Freyr to whom such supplications for good harvests were made:

Freyr is the most renowned of the Æsir; he rules over the rain and the shining of the sun, and therewithal the fruit of the earth; and it is good to call on him for fruitful seasons and peace. He governs also the prosperity of men.

And that, I think, is the kick-off of the three-day Yule celebration. We have the “son’s sacrifice” on the first night, of a boar or swine, in honor of Freyr, accompanied by a great feast, and specifically the swearing of oaths on the head or body of the sacrificial animal.

In modern practical terms, when most Asatruar don’t have it within their means to sacrifice an actual boar, it seems clear that at least featuring pork (as the famous Christmas Ham of Scandinavia, or in some other form) would be indicated. A ceremony involving the swearing of oaths would also seem to be a critical piece of the celebration (again, setting the stage for the coming year with events happening near its start); I might go so far as to roast a swine head specifically for the occasion, even if it didn’t necessarily form part of the feast itself. In my own tribe, we use a pig effigy made of straw, and make our promises and state our hopes upon it, before offering it to Freyr.

The only mystery, to my mind, is the significance of the name of the sacrifice. I might have expected something like Jólablót, but it turns out that the word doesn’t exist in Cleasby-Vigfussion’s dictionary of Old Icelandic. So why sónarblót? Why “son’s sacrifice”? I think I might have an idea.

Yngve-Freyr is said to have been the progenitor of the Swedish line. His name appears in the royal lineages, he founded Uppsala, most of the place-names associated with him are found in Sweden (in and around Uppsala, as a matter of fact), and is even referred to as the father of the Swedes:

Shall it be said of Frey’s brave sons,
The kingly race, the noble ones,
That they have fought in deadly battle
With the head-gear of their cattle?
(Ynglingatal 23)

It’s purely speculative, of course, but it seems to fit the available information. I’ll keep digging, and if I unearth additional information, I’ll certainly pass it along. But it seems to point to the Yule sacrifice to Freyr as being particularly ancient, and eventually disseminating across the Norse world, only to be co-opted by the incoming Christian empire.