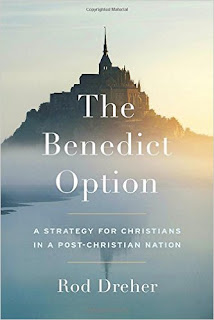 Several months ago, conservative commentator and author Rod Dreher released his latest book, The Benedict Option, subtitled A Strategy for Christians in a Post-Christian Nation, and it made quite a splash in the conservative Christian community. I read it, and I have to wonder if there isn’t some kernel at the core of the idea that Asatruar could use as well.

Now, obviously, this is a book aimed at a traditionalist Christian audience, primarily Evangelical, Catholic, or Orthodox. And there’s certainly nothing theological in the book that lends itself to any sort of Asatru application. But there’s some social, educational, political, and economic ideas that warrant a closer look.

The thumbnail argument in the book is that the West is “post-Christian”, and thus Christians need a new strategy to be able to maintain their unique identity in the face of a secular-liberal culture that not only has social values at odds with a lot of Christian values, but which insists on actively forcing those values on everyone, including those whose religion increasingly finds those values odious or even directly against its tenets.

The strategy he endorses is based on the Benedictine monastic tradition; physical and cultural separation from “the world” (in other worlds, from the greater non-Christian culture in which we live), with the formation of explicitly Christian communities being highly recommended, and a rigorous application of Benedictine religious principles in the form of prayer, hospitality, the work ethic, and more.

In terms of cultural separation, he provides the following advice:

Secede culturally from the mainstream. Turn off the television. Put the smartphones away. Read books. Play games. Make music. Feast with your neighbors. It is not enough to avoid that which is bad; you must also embrace what is good. Start a church, or a group within your church. Open a classical Christian school, or join and strengthen one that exists. Plant a garden, and participate in a local farmer’s market. Teach kids how to play music, and start a band. Join the volunteer fire department. (p. 98) 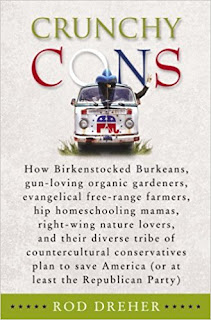 If some of that sounds a bit odd coming from someone who is very much a champion of Christian conservatism, bear in mind this is the same guy who wrote Crunchy Cons, subtitled How Birkenstocked Burkeans, gun-loving organic gardeners, evangelical free-range farmers, hip homeschooling mamas, right-wing nature lovers, and their diverse tribe of countercultural revolutionaries plan to save America (or at least the Republican Party). I have only skimmed that one as of this writing, but it’s at the top of my to read list, for obvious reasons. It seems to check a lot of boxes for people I know in Asatru (again, looking past the Christian emphasis and focusing on the cultural ideals).

He also considers this sort of cultural separation as a tool for what he calls evangelization in and of itself:

As times get tougher, the church will become brighter and brighter, drawing people to its light. As this happens, we Christians should not be afraid to consider beauty and goodness our best evangelistic tools. (p. 117)

That should sound pretty familiar to those Asatru who embrace the idea of outreach by example. That is, by living honorable, joyous, simpler lives along the same patterns of our ancestors, and not being afraid to let our friends, co-workers, and neighbors know that we are Asatru, and that’s what informs our life choices, we might encourage more of those people to come home to Asatru.

His solution isn’t necessarily to pick up stakes and settle in the woods with a dozen people who think like you do, although I would daresay he wouldn’t rule that out. Rather, the preferred strategy seems to be to create pockets of culture-within-culture. Deliberately moving within walking distance of your church, for instance. Once you do that, your everyday life starts to be filled with people who think, and worship, the way you do. Doing so allows you to reinforce those cultural and religious values you want to embrace, and to limit the necessity of dealing with the secular-liberal culture that is so intent on spreading its memes to every host through mass media and cultural peer pressure.

Imagine that scenario, adopted for Asatru. Here in New Jersey, the tribe to which I belong has a bunch of members, but we’re scattered around New Jersey, Pennsylvania, and New York. Some live as much as three hours away from one another (we tend to meet in more central places, so it’s not quite as onerous for the outliers). But imagine we all decided, “hey, let’s all pick a small rural town and buy or rent houses there.” Would it be initially disruptive? You betcha. Jobs would be lost, new ones would have to be found. But in the meantime, we’d have a whole support network of people we know, and love, and consider kith and kin to help us through the rough times.

And imagine how easy it would be to decide where to open that hof!

There’s a lot in Dreher’s book that a non-Christian would need to jettison, and no mistake. Much of it is in the details of his recommendations; his obsession with sex, homosexuality, and related things is pretty awkward, but par for the course when one considers control of sex is one of the principle instruments of cultural control the Church has used over the centuries, precisely because it is such a fundamental biological urge. I’m certainly not arguing Asatru should embrace that sort of theological baggage.

But the core concept, minimizing the influence of the modern culture, and maximizing the formation of face-to-face communities which foment the creation of real bonds, I think is a perfectly valid one, especially for a religion like Asatru which finds itself also at odds with the modern secular, liberal, industrialized, corporatized, homogenizing, culture in which we live. 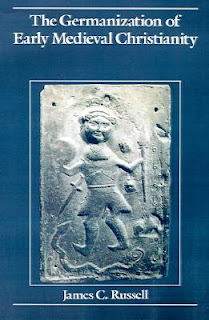 Let us not forget that we are not only living in a post-Christian culture, but we are also living in a post-Pagan culture. The Christians are looking at a loss of the dominance of their world-view in the West that has only taken place over the span of a few decades. We as Asatruar are dealing with a culture that saw many inherently pre-Christian aspects systematically destroyed and replaced. We’re dealing with a modern culture that has not replaced our own, but is in the process of replacing the one that replaced ours! Now, as part of the historical process, Christianity not only self-injected itself with Germanic religious and cultural concepts, but specific ritual and celebratory practices managed to survive under a thin Christian veneer for nearly a millennium, only to be finally almost obliterated by the Industrial Revolution and the flight of the agrarian folk who maintained those customs into the cities, where the rigid demands of industrial life made it impossible to retain them.

When we live in a culture that labels folkishness as racism, and a magical word-view as superstition, encourages us to be as removed from the production of food as possible, encourages radical individualism and atomization, and insists that we are somehow socially inferior if we don’t buy the newest gadget, and which insists that the latest social fad is a basic human right that must be enforced with threats of prison and economic ruin, and on and on and on, that’s a culture that should rightly be shunned wherever possible.

In its place we should seek to create a culture-within-the-culture that is based on our natural tribal affinities, on the cycles of nature and agriculture, on the concept of honor rather than shame and family rather than political party, on the knowledge that ours is a magical universe at its core and science for all its wonders is not the be-all and end-all of human experience, and on and on and on. And to do these things not online in blogs and emails and Facebook threads, but in the real-world, where you can walk down the street to a local ice-cream parlor and see one or two of your fellow Asatruar as you do so.

Take away the Christian baggage, and there’s a core concept in the Benedict Option that I think Asatruar would do very well to look into.