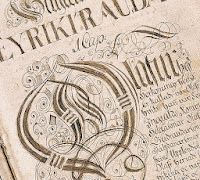 Today Medievalists.net features a nice little article giving brief overviews of ten relatively obscure Icelandic Sagas, and in many cases give links to where you can find an English translation:

Some of the richest and most interesting writings from medieval Europe come from one of its furthest corners: during the 13th and 14th century Icelanders began to write down the stories they had collected orally from previous centuries. These sagas would cover events in Iceland and elsewhere, going back to the days when the island was first discovered and settled back in the ninth century. They are stories of family feuds, outlaws and the occasional monster lurking somewhere the uninhabited stretches of the Iceland.

Many readers will know some of these Icelandic sagas, such as Egil’s Saga or Njal’s Saga, but the Icelandic writers penned dozens of these stories. Here are ten sagas that you may not have heard of, but offer a fascinating tale. All of these works are available in an English translation, but it maybe difficult to find a copy: