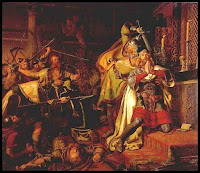 Mother’s Night and the New Year behind us, we find ourselves more than two weeks from the solstice, and a week before Yule itself. We now find ourselves at St. Knut’s Day, which is celebrated in Sweden and Finland, but not Denmark or Norway. The timing of this feast day deserves a little attention, as it’s got a somewhat involved history. The day is named for Knut Levard of Denmark, who was killed in a civil war and canonized in 1169. It should be noted that that is a pretty late date, and well into the era of Christianization.

Originally, Knut’s Day was celebrated on January 7, the anniversary of his death. In the 17th century, it was moved to the 13th of January, presumably because it was interfering with the celebration of the Epiphany on the 6th. I’m going to ignore that later date, because it is way outside my era of interest for this analysis, and has little if any significance when it comes to replacing already-established Heathen celebrations.
Traditionally, Knut’s Day represents the end of the Christmas season in Sweden and Finland. There are “plundering parties” as the Christmas tree is taken down and the edible ornaments that traditionally adorn it (candies, cookies, and cakes) are removed and devoured.
More interesting, perhaps, is a tradition that is akin to our modern Halloween, where children and adults go from house to house in scary costumes of ghosts and scarecrows, attempting to frighten neighbors and friends.
There is dancing, and what has been described by L. Lloyd in his “Peasant Life in Sweden… Illustrated” (written in 1870, pp. 217-218) as:

…”Gästabuds-Krig,” or war of hospitality. The master of the house comes into the apartment where the “Jul” festivities have taken place, and affixes his axe into the middle of the floor; the housemaid follows him with a broom, the kitchen-maid with a knife and a spoon, or rather ladle, the “Källare Drang,” or tapster, he whose duty it is to look after the cellar, with the spigot of the ale barrel, with other like company, and makes pretense to drive away the guests, and should there be any present who can read and sing, they read aloud King Orre’s Legend, and sing his ballad, the words of which I have not at hand, but which in some degree resemble our own doggerel:

And presumably the plundering of the pantry of the last edibles that were cooked and baked and brewed for the Yule celebration would be polished off by the guests.
One fascinating tidbit, the “King Orre’s Legend” mentioned above is also mentioned in a tantilizing tidbit from Bertha Fillpott’s most excellent The Elder Edda and Ancient Scandinavian Drama (p. 123):

It has recently been suggested that the dramatic Yule game in Sweden in which “King Orre” figures originated in a representation of the defeat of King Erik of Pomerania.

With a footnote referencing “H Jungner, Om Kung Orre, Maal og Minne, 1914, pp. 123 ff” that I have been unable to follow-up on. Anyone able to help track that reference down is invited to contact me in the comments below. Sounds fascinating.
Terry Gunnell, in his Origins of Drama in Scandinavia (pp. 96-97), adds a little more meat to Knut and Orre’s bones:

The superficial nature of some of the Christian festivals is especially clear in the case of the figure of Knut, since the saint obviously never had anything to do with ‘sweeping’ or ‘knocking out’ Christmas. Magnus Olsen has thus sought to establish an early relationship between the traditional figure of Knut and other figures such as the legendary King Orre, and the spirit of Þorri, a personification of the early Scandinavian fourth winter month beginning c. 13 January. Considering the fact that Knut is often acted in folk tradition, it might be noted that both Knut and Þorri are identified in the rhymes sung about them by the same sole characteristic of a beard. A faint possibility exists that this shared feature has roots in a visual tradition of disguise which originally applied to both figures at this time of year. The vestiges of such a tradition might possibly be found in the unique account given by Jón Árnason of how Icelandic farmers used to ‘welcome Þorri onto the farm’ (‘að bjóða Þorra í garð’) by hopping around their farms half-dressed on the first morning of Þorri, their wives following suit the first morning of Góa, the following month.

I still want to know exactly what goes on with this acted-out Knut folk tradition (other than apparently an elder version of the Polar Bear Challenge). To the BOOKS! 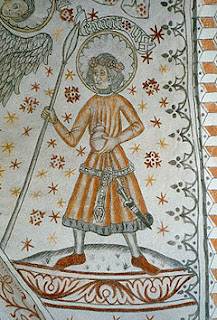 So, to bring this all back to the subject at hand, all we need to do is make our standard 8 day correction for dates, because of the transition from the Julian to the Gregorian calendar, and I think we have the answer to all this mummery. Adjust 8 days from the original date of January 7, and we get January 15. Right around the middle of winter.
A day or two after Yule.
I think what we see in Knut’s Day are the events of the end of Yule. Exact dates are of course fungible when it comes to the ancient calendars, but I think what we’re seeing here are the equivalent of modern “Boxing Day” traditions. The last of the food prepared for Yule needs to get eaten, the decorations need to be taken out, and, let us not forget, this also marks the end of the “out and about” time for the Wild Hunt, which began waaaay back on Lussinata, on the solstice. That’s combined in a visiting tradition involving scary costumes; made all the more relevant by the fact that there’s still excess treats to be handed out (in the “war of hospitality”), and the gag is all the funnier because everyone knows that the Wild Hunt isn’t out and about after Yule.
Man, this really works.
We’ve been circling the big one for a while now, but we’re homing in on Yule itself. We’re getting there, dear readers, have just a little more patience!