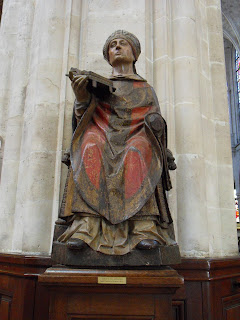 In my previous installment, I noted that the life of Saint Germain of Auxerre seemed to recall an The Golden Legend of Jacobus de Voragine, published in 1275:
episode, or at least a theme, that had a loose connection with the tradition of the Feast of the Parcae, or Mothers’ Night. In this installment, I’d like to examine a similar connection with another Germanic pagan theme. Here is the relevant passage, again from

He [Germain] preached on a time in Britain so much, that the king denied him lodging, and his people. Then it happed that the king’s cowherd went with his portion that he fetched at the palace, and bare it to his little house. And he saw the blessed Germain and his men seek their lodging where they might be harboured that night. And the cowherd brought them into his house, and saw that they had much hunger. But he had not meat enough for him and for his guests. This cowherd had but one calf, which he did do slay for to give to them, and he received them debonairly with the little good that he had. And when they had supped and had said graces, S. Germain bade him bring to him the bones of the calf and to lay them upon the skin. And after made his prayer to God, and anon the calf arose to life without tarrying.

Naturally, this recalls the legend of the laming of Thor’s goats, which was recorded by Snorri Sturluson in the Edda, around 1220:

Öku-Thor drove forth with his he-goats and chariot, and with him that Ás called Loki; they came at evening to a husbandman’s, and there received a night’s lodging. About evening, Thor took his he-goats and slaughtered them both; after that they were flayed and borne to the caldron. When the cooking was done, then Thor and his companion sat down to supper. Thor invited to meat with him the husbandman and his wife, and their children: the husbandman’s son was called Thjálfi, and the daughter Röskva. Then Thor laid the goat-hides farther away from the fire, and said that the husbandman and his servants should cast the bones on the goat-hides. Thjálfi, the husbandman’s son, was holding a thigh-bone of the goat, and split it with his knife and broke it for the marrow. “Thor tarried there overnight; and in the interval before day he rose up and clothed himself, took the hammer Mjöllnir, swung it up, and hallowed the goat-hides; straightway the he-goats rose up, and then one of them was lame in a hind leg.

It’s worth pointing out that the laming of Thor’s goats is alluded to in the Eddaic poem Hymiskviða, so it’s not just an invention of Snorri:

38. Not long had they fared | ere one there lay

Of Hlorrithi’s goats | half-dead on the ground;

In his leg the pole-horse | there was lame;

The deed the evil | Loki had done. 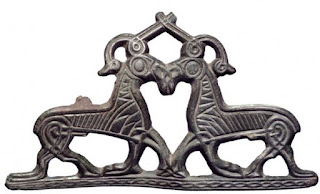 The pattern is, of course, exactly the same. The animal is cooked and eaten, the bones gathered up on the skin, and the animal is resurrected. I’ve previously linked the story of the laming of Thor’s goats with the Krampus legend, and the Feast of St. Nicholas. However, the theme of the resurrected animals, bones, and skins is much more widespread than I had originally realized. We see it mentioned over and over in western Alpine witch trial records, for instance, and the legends of the benandanti, which I mentioned in the previous article. Interestingly, the witchcraft trial evidence mentions that the animals so resurrected are no longer able to work as well, or provide as much milk, as they did before they were resurrected. This connects them more closely with the laming of the goats, while the fact that the saint was explicitly said to raise his animal and have it be as capable of work as before, might be a deliberate counterpoint to then-current ideas about the resurrection of the bones (along the lines of “the pagans do it and lame the animals, but when a Christian does it, they’re fine”).

In terms of St. Germain, it should be remembered that just because the individual died in 450 CE, is no guarantee that the legend of the resurrection of the bones can be dated to that time. I can find nothing in earlier sources that mentions the legend in connection with him, so it’s entirely possible that the connection was an invention of Jacobus de Voragine, or a later source that he used.

That said, we can firmly establish that the resurrection of the bones was a theme current throughout the Germanic parts of Europe in the 13th century. We see it both in Iceland and in the Alps, and, as we shall see in another article, it was much more widespread than that.

We are left with three possibilities regarding the resurrection of the bones:

I think it’s fair to discount the third option without some glaring new evidence to support it, given the specificity of the details. That leaves the first two options, and a much more comprehensive examination of the sources, and particularly the timing of the sources, is needed, to be able to track the spread of the idea of the resurrection of the bones.