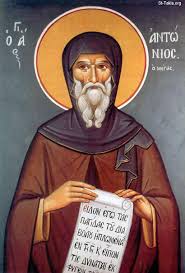 January 17th is both the Feast Day of Saint Anthony the Great (not to be confused with St. Anthony of Padua, whose feast day is in June and is often celebrated with much merriment) and the traditional day for wassailing the orchards in England. This post will deal with the former. The latter will come later.

Unfortunately, despite his association with pigs (which are well-attested to be connected with the god Ingve-Freyr), it seems that there really isn’t much to be gleaned from St. Anthony and any possible associations. The association with pigs does not appear in the official hagiography of Anthony. Indeed, the story of Anthony having been a swineherd prior to his monastic life seems to be a Mediterranean addition to his life.

Since our methodology looks for elements of Saints’ lives and celebrations that are unique to northern Europe, in order to suss out possible connections with lost Germanic gods, this would seem to be a dead end. And one of the things about scholarship is, if the evidence doesn’t line up with the theory, you ditch the theory. Sometimes you have to be able to give up something that looked promising at first, if the evidence doesn’t line up. This is one of those times.