Asatru, like most pre-Christian religions, is what might be called a “sex positive” religion in modern parlance.

That is, we shouldn’t have the same intense hang-ups about sex and sexuality that plague the Abrahamic religions; Judaism, Christianity, and Islam. The sort of thing that leads to mandatory celibacy for Christian priests and the insistence that sex is only for procreation as seen in Christianity, odd compulsions regarding menstruation in Judaism, and female genital mutilation and rules regarding female education and socialization designed to ensure female fidelity in Islam.

We like to fuck*, and we’re not afraid of fucking and people who do fuck. It’s natural, it’s pleasurable, and it’s something to be encouraged.

That’s not to say that Asatru endorses complete licentiousness, especially within the bonds of marriage. There are definite moral proscriptions around men who seduce the wives of other men (along with oathbreakers and murderers, the only people destined for torment in the afterlife), and Lokasenna 30 implies that women sleeping with married men were equally ill-regarded. Ibn Fadlan’s account supports the view that adultery was a serious crime. Incest was regarded as a vice among the Aesir, and so presumably among mortals as well, although it’s highly dubious as to whether the tales of the gods were intended to be models for human behavior in all instances. And divorce was almost ridiculously easy for a woman to do (she even got her dowry back!). The law codes are harder to interpret, because so many of them were written down in Christian times, but those that scholars deem the oldest do seem to agree with this.

However, it should be noted that polygamy wasn’t unknown, especially among men of high rank, if Adam of Bremen is to be believed. The Germanic people practiced exposing unwanted children, so it’s difficult to imagine they’d blink twice at aborting a child in the womb if they had the technology (as far as I’m aware, the jury’s out on whether or not they did, in the form of abortifacient herbs and the like; the Romans certainly did, so it wouldn’t be a stretch). Ditto for birth control; they almost certainly had some form of condom. And rape? I realize it’s a common stereotype, but it might very well have been much less common in Viking society than other contemporary societies, even after battle.

I should point out that none of this negates the idea of traditional gender roles. They weren’t exactly iron-clad Commandments brought down from the Mountain, but even though there were defintiely exceptions, they were still only the exceptions that proved the broader rule. (Part of the problem with modern society is that everybody feels the need to be special, so they’re the ones who get to be that exception, just to prove they’re an individual; I put the blame on our postmodern, secular, atomized society; but that’s for another article.)

Homosexuality and gender and the like are larger questions that deserve articles of their own, if not entire books. Suffice to say that our pre-Christian ancestors were a lot more liberal and forgiving about such things than many conservative Jews, Christians, and Muslims are today**, but it’s also true that the exacting categorization that modern society insists upon simply didn’t exist back then. There was no “gay lifestyle.” There was a Viking lifestyle, or a Gothic lifestyle, or a Saxon lifestyle. The ones complaining about the “womanly clattering of bells” were the Christians on the outside looking in. 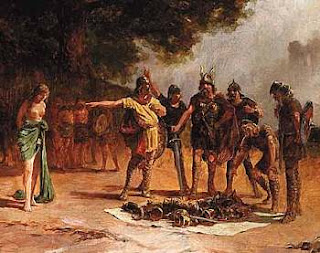 But that brings us to those who think that Asatru should espouse some sort of “return to traditional values.” The problem is, their idea of “traditional values” is somewhat at odds with the actual pre-Christian values of our Heathen ancestors. When examined critically, their idea of “tradition” goes back to Eisenhower, or even worse, the Victorian era. It’s entirely understandable, given the society in which we all live, but it’s something that must be actively and consciously resisted.

But when you hear an Asatru leader start talking about “traditional values” you must ask yourself, “what tradition is that?” Is that the “tradition” of the 1950’s, when Protestant Christianity had hegemony over western culture, sex was something you only did once the kids were asleep, indoors (preferably missionary style, with the lights out), and homosexuality got you fired from your job or thrown in jail? Did Egill and Ásgerðr sleep in separate beds like Rob and Laura Petrie?

Or is it the tradition of the 9th century, or the 5th century, or the 1st century, when men and women weren’t afraid to fuck one another, but still knew the importance of marriage? When the only things that were beyond the pale were incest and adultery? When people danced licentious dances around Maypoles, pairing up young boys and girls for some not-so-subtle imagery?

Asatru isn’t afraid of sex. We embrace it, we love it, and we practice it every chance we get.

* My use of the Saxon-derived term is deliberate. If you’re a delicate hothouse flower who can’t stand the use of a perfectly good word of Germanic origin, perhaps Asatru isn’t for you.

** Yes, yes. Ergi. I know. As I say, it’s a very complex subject, and that particular question is quite tangential to this particular article. I mention it here only because someone will give me grief if I don’t.