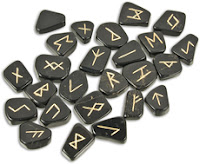 One of the most common uses one sees for the runes in modern Pagan and Heathen literature is divination. There are “runic spreads” that are obviously based on Tarot cards, which can range from a simple “draw three runes for past, present, and future” to complex patterns of a dozen or more, each of which is drawn blindly and represents a specific aspect to a given question. What most don’t realize is that the question of whether the runes were historically used as a divinatory tool is actually hotly disputed among both scholars and modern-day Heathens. The origin of the claim that the runes were used as a divinatory tool comes from a passage in Tacitus’ Germania:

Auguries and Method of Divination. Augury and divination by lot no people practice more diligently. The use of the lots is simple. A little bough is lopped off a fruit-bearing tree, and cut into small pieces; these are distinguished by certain marks, and thrown carelessly and at random over a white garment. In public questions the priest of the particular state, in private the father of the family, invokes the gods, and, with his eyes toward heaven, takes up each piece three times, and finds in them a meaning according to the mark previously impressed on them. If they prove unfavorable, there is no further consultation that day about the matter; if they sanction it, the confirmation of augury is still required. – Tacitus, Germania, A. J. Church and W. J. Brodribb, trans.

The sticking point here is the term “certain marks”, which in the original Latin is given as notae. “Notae” can mean anything from an alphabetical letter to a simple X. It could well be that the ritual described above simply involves seeing how many of the pieces of wood landed face up. On the other hand, it certainly could mean that runes (or a sort of proto-runic alphabet that would have been used in the 1st century CE) were used. The simple fact is that we don’t know, and until we do, we can’t really make any assumptions about what Tacitus meant by notae. That said, we need to move on to the other historical examples of runic divination.

The problem is, there aren’t any.

In all the sagas, Eddaic poems, runic inscriptions, surviving folklore, accounts of Germanic societies from outside observers, grave finds, archaeological digs, numismatics, etc. etc. etc. there is not a single account of runes being used as tools to divine the future or seek to know the will of the Gods. Not one. Oh, there are plenty of examples of divination in the lore. There’s a fascinating account of dropping coins onto a balance-type scale to determine the answer to a question. We read of Icelanders interpreting the snorting of horses, others reading the flight and songs of birds, many accounts of interpretation of dreams, inviting land-spirits to attend and answer specific questions, and on and on. But nothing about runes as divination tools. Surely somewhere, someone, would have mentioned it even in passing, if it were a historical practice.

Which is not to say that we don’t know that the runes were used for magical purposes, either. We do indeed; they were used to inflict curses on others, for healing, to drive out land-spirits and thus attack the luck of a land, to protect ships, to aid with eloquence, to help with childbirth, and many other uses. So the runes were indeed used in magic. Just not in divination.

Does that mean that those who advocate runic divination today are charlatans? Certainly not. It just means that runic divination cannot be said indisputably to be an historical practice. Reputable sources that discuss the practice should make it clear that the historicity of the art is in dispute, and is something for which no definitive proof can be offered. It doesn’t make it any less valid (in the sense of working as a practice), but one should always go into such things with both eyes open, and not fool oneself into thinking a given practice is two thousand years old when it is just as likely to be a modern invention.

And, as always, any book that burbles about a “blank rune” (as shown in the image above; irony intended) should be thrown into the nearest wood-chipper. Just sayin’…

One thought on “Runology, Part 2: On Runic Divination”