As my regular readers will doubtless remember, I’m keen on ritual. I love seeing how different people do their rituals, and I love to see what works and what does not. I’d like to take some time to analyze in depth the way different groups do things, and I’d like to start with the following Vårblot (spring sacrifice) as performed by the Samfundet forn Sed Sverige (a Swedish Heathen group) in 2014. It’s in Swedish, but I don’t think you need subtitles to figure out what’s going on.

0:00 – First some general things about the start. I love the procession to the actual site of the ritual, and I love the ubiquitous music used throughout the ritual (I’ll be harping about the music throughout this analysis).
1:03 – I note that the folk gather in a circle for the ritual itself, which seems to be just the standard default setting for any large ritual (and I daresay seems to be an import from Wicca or ceremonial magick), although I can’t say I know of anything specifically in the lore that mentions it. On a practical level, it does give everyone a good view of what’s going on, but it’s not something that is particularly historical.
1:09 – See that tarp in the foreground? That’s actually an integral part of the ritual, and one which I absolutely love. More on it, and what’s under it, later. The music continues, setting the mood as one of celebration and joy.
1:27 – I love the Freyr god-post on the left. Now THAT’s a priapic Freyr! I note that a few other people (dispersed equally around the circle?) also have similar representations of gods and goddesses.
2:31 – Sounding of the horn to call the group to attention. And it doesn’t sound like a moose stuck in quicksand. Nice.
3:15 – Note that the priest is cross-dressed, which indicates he is dedicated to Freyja. Also note the starting of the nyd-fire for the ritual. I would not be a bit surprised if there were nine types of wood used for that fire.
3:27 – This is where we start to really take off. Rather than just let everyone stand around while the nydfire is lit, the priest starts a chant that is taken up by the assembled folk, giving them something to do rather than stand around awkwardly. It also adds a bit of religious significance to this part of the ritual. It’s a simple chant with a simple melody, so after a couple of repetitions, anyone in attendance could join in. Really nice.
4:20 – The drums have joined in, folks are clapping, and now the assembled folk are being blessed with the mead (?) by sprinkling them with a sprig of evergreen. I can’t say how much I love this. Compared to just standing around waiting while each person gets a personal blessing, this is wonderful. It’s joyous, and it’s fun, and it keeps everyone occupied until its their turn.
5:30  – I do believe this is one of the few times the altar is actually used, when she puts the cup of mead (?) on it after everyone has been blessed. The people are the focus of the ritual, not the altar. Interesting, but see also 22:25.
5:45 – He says something funny, and folks are laughing. It’s not all grim and serious. Now begins what I think is an explanation of the purpose for the rite. 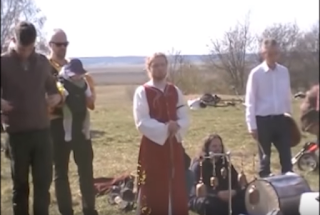 7:03 – Neat “singing bowl” technique. I think that’s Tibetan. Certainly has a haunting tone. I do like the fact that he’s singing, rather than just reciting.
10:06 – And then the bells kick in and it keeps things interesting while he’s speaking. Again, sound to keep people from being bored.
12:40 – Get everyone involved, this time with clapping, and then the call-and-response. Just because someone is speaking doesn’t mean everyone else needs to stand their silent and stock-still.
15:18 – I love this bit. This is when “Spring”, who has been under the tarp in the foreground all along, wakes up. I’d characterize this bit as a sacral drama, as the assembled folk attempt to wake up Spring, who, like a teenager on the first day of school, doesn’t want to get up. And to accomplish this we have another very simple chant that anyone can join in with, supported by the drums. Beautiful.
18:30 – Spring gets flirty. We’re a sex-positive religion, after all.
22:25 – Music is in full swing while people offer grain to the god-images on the altar. Again, not just a silent and grim affair.
23:40 – Here is perhaps my only problem with the ritual – the unnecessary combination of the blot and sumble. Drinking toasts in ritual is the province of the sumble rite; they’ve already made their offerings, and it seems unnecessary.
27:00 – The horn sounds the end of the ritual, neatly bookending the same thing at 2:31.
27:35 – And a joyous “Yahoo”. Laughter, enthusiasm, and fun. And then they end up with a sort of circle dance.
All in all, there’s a lot to love about the way this ritual was done. The music, the fun atmosphere, the dancing, the element of drama with Spring being awoken, the chants and songs giving the folk some involvement while things were being done that did not immediately affect them; there’s a lot of great ritual-craft here.