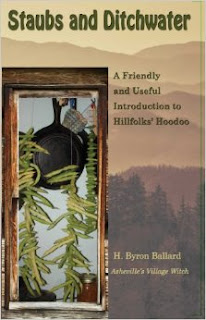 H. Byron Ballard is billed as “Ashville’s village witch“, and her first book, Staubs and Ditchwater, is a short but wonderful entry into the world of Appalachian hoodoo and folk magic.

The book is structured in topical chapters, each of which is separated by a relevant homey reminiscence about life in rural North Carolina. Her style is wonderfully easy to read, and she really makes it feel like you’re sitting on a porch on a mountain cabin, listening to her talk while the birds and bugs sing into the waning afternoon. She really has a gift for language, and her writing “in dialect” is done rarely enough as to not be annoying or a hindrance to understanding.

Chapter one sets the scene, giving a brief history of the region and its magical and religious history. Chapter two covers magical tools, chapter three materials, chapter four divination, chapter five provides some techniques and spells (or “receipts” as they are called), while chapter six wraps up the whole thing nicely.

What drew my specific attention, in my studies of Germanic folklore and folk-magic, were the similarities between what Ms. Ballard describes and sources from Trolldomr (Scandinavian folk-magic), Braucherei (Amish folk-magic, itself derived from west-German sources), and pre-Christian practices described in penitentials, sermons, Saints’ lives, and similar sources. After all, Appalachia was settled by Anglo-Scottish border country folk (right in the thick of the ancient Danelaw and Norse influence, not to mention the Anglo-Saxons) and Germans.

If the book has one failing, it’s that she doesn’t always differentiate between elements of her practice that are borrowings from Amerindian or African diaspora magic, although she does mention that such borrowings exist. Her second book, Asfidy and Mad-Stones, does seem to do a better job of making such distinctions. Still, it’s not an insurmountable problem, and doesn’t greatly detract from the overall utility, and wonderful readability, of this terrific little book.

If you’re at all interested in folk-magic, this is a great addition to your library.