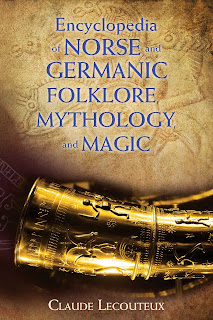 I’ve always been a big fan of Claude Lecouteux’s work, and when I heard he was publishing a reference work relating to Germanic lore, I pre-ordered it at once. It finally arrived, and I’ve had a chance to look through it. And it is everything I had hoped it would be.

The obvious comparisons are going to be made between this work and other reference works on Germanic religion and mythology, such as Rudolf Simek’s Dictionary of Norse Mythology (probably the standard in the field, at least in English), Andy Orchard’s Dictionary of Norse Myth and Legend, John Lindow’s Norse Mythology: A Guide to the Gods, Heroes, Rituals, and Beliefs, and to a lesser extent John Haywood’s Encyclopaedia of the Viking Age.

Where Lecouteux’s book distinguishes itself from those titles is both in its lack of focus on the Norse material and the Viking era (although it does not distance itself from either), as well as its inclusion of tons of folkloric references, rather than sticking to the same old themes found in Norse and/or Germanic mythology. And that in particular is where this work shines, since this is a focus that all too few such works, let alone Asatruar who endeavor to recreate the Germanic mindset, have.

That the book was originally written in French (and, I presume, published in that language) gives the entries an international appeal that is so often denied to those of us without fluency in a variety of European languages. The sources span the gamut from Germany, France, Poland, Scandinavia, and even further afield. Just having access to condensed entries based on that broad range of material is a reason to get this book.

But to take a few of the more interesting entries as examples of the breadth and depth of the coverage, we have subjects as varied as Hernoss, a sort of idol that was still to be found in Norway in the 19th century, a brief discussion of changelings (children who are stolen from their parents and substituted with supernatural children), a lengthy discussion of Perchta, and Ourk, said to be the name of the leader of the Wild Hunt in a district in the Tyrol. This in addition to the standard entries on Norse gods and mythological themes that one would expect in a book of this type.

All in all, this is a fantastic book, and well worth it for the wealth of folkloric sources, as well as the conventional entries informed by folklore, that it brings to the table. I don’t think it replaces Simek’s Dictionary, but rather it accompanies it well, filling in all manner of gaps. It definitely stands as a worthy addition to any Asatruar’s library. Five stars out of five.

You can buy the book here.