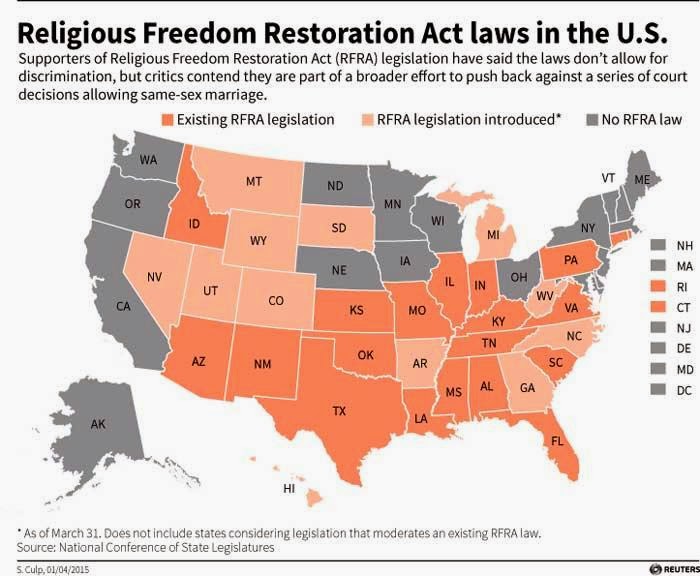 As just about everyone by this time knows, Indiana and Arkansas recently passed versions of the Religious Freedom Restoration Act (RFRA) which was originally acted into law on the federal level by then-President Bill Clinton in 1993. A number of states have similar statutes, and until now their enactment hasn’t been too controversial a proposition.

The current opposition to RFRA laws is rooted in the new perception that they are being enacted for the benefit of majoritarian religions (i.e., Christianity) so as to allow them to promote anti-homosexual discrimination. But that is not at all what RFRA laws do. Rather, they were (and are) enacted to protect the religious rights of minority religions from governmental overreach, such as:

Hardly a list of typical supporters of Westboro Baptist.

At most, all that RFRA does is to create an exemption from a legal duty for the religious objector. Neither Indiana nor Arkansas has a statewide public accommodation law that prohibits discrimination on the basis of sexual orientation. Since there is no requirement in either state’s law for bakeries or florists or caterers to treat same-sex couples equally in the first place, the religious objector does not need an exemption in order to refuse to provide goods or services for same-sex couples.

So much for RFRA being enacted as an excuse to discriminate. What RFRA laws do is say that the government cannot restrict religious activities without a “compelling interest” in doing so. How horrible! 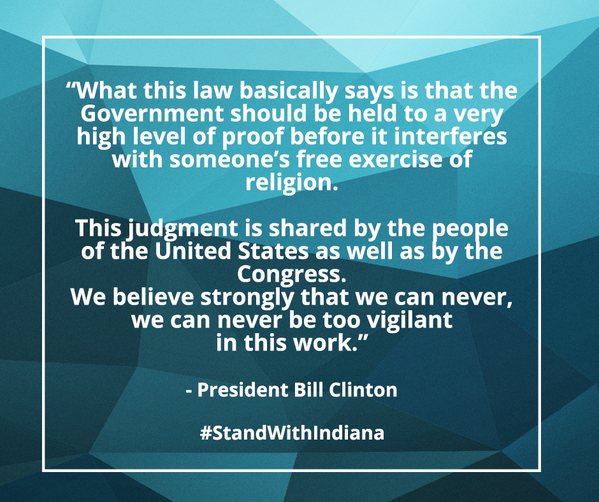 The fact is that the Pagan and Heathen communities have a lot more to gain by supporting these sorts of laws than they stand to lose. The homosexual community (and the left in general) has essentially thrown Pagans, Heathens, and other minority religions under the bus in the name of supporting gay rights (specifically gay marriage). I’m personally in favor of gay marriage, but not at the expense of my freedom to worship the Gods in the manner of my choosing. Lucius Svartwulf Helson puts it brilliantly:

They [the Gay Commuity] do not care about Pagan Rights. In leading the charge to have major business and other state government boycott states that try to affect a Religious Freedom Law, the GLBT+ community shows not only a complete disregard for any attempt to enshrine into law legal ways to defend and help Paganism obtain its full legal rights, they have shown a completely Fascist attitude to the rights of anyone but themselves, but especially to anyone that identifies themselves as religious. To further this end, Christians (like Memories Pizza) have been repeatedly threaten with real physical harm and the firebombing of their businesses.

(Read the whole thing; it’s terrific.) “Witchery in the Express Lane” makes a similar point, from a slightly different angle:

However it’s been all about the LGBT community and not about people that actually benefit from this law. People like me, a pagan, witch, Hellenist, Heathen and United Stated Citizen. I demand that my religion not be attacked by the federal government and not to be interfered by the federal government. But what really burns me up is that everyone is more concerned about the rights of the LGBT community then about the rights of people who call themselves something that, back then would of gotten you burned alive. 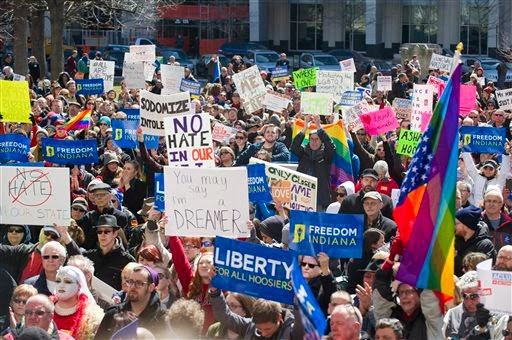 The gay community really seems to be burning a lot of bridges here. Heck, the push to legalize gay marriage in general seems to have just cost them around 34,000 black churches. Folks are finally starting to realize that fighting for their own religious rights is just as important, or even more important, than fighting for the sexuality rights of other people. Especially when the people they’re fighting for suddenly turn on them and attack a law that is designed to, and does, ensure those religious liberties, even though it doesn’t do anything to affect the rights of homosexuals in practice, because they don’t like three of the nineteen people who were present at the signing ceremony.

Meanwhile, homosexuals are being executed – actually killed – by Muslim fanatics in the Middle East, and the pro-gay protesters are silent.

Given a choice between fighting for my real rights, and someone else’s imagined slights, I’ll take my rights every time.