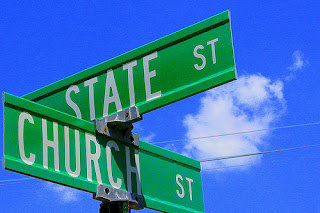 There have been a couple of stories in the news lately that directly impact the ongoing discussion of religious liberty in this country, and I thought I’d offer an opinion or two.

The first is the case of Kim Davis, elected County Clerk of Rowan County, KY, who is (as of this writing) in jail for contempt of court after refusing a judge’s order to begin issuing marriage licenses to same-sex couples. She appealed all the way to the US Supreme Court, who declined to hear her case.

In Ms. Davis’ case, she can’t simply be fired or reassigned, because she was elected to the office of County Clerk (a position that pays $80,000 a year, which in that area of the country is quite a sum). To take office, however, she did swear an oath to fulfill her duties, as is also required by Kentucky state law (interestingly, not all states have such laws!). 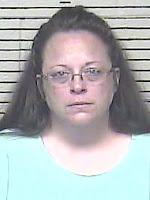 Setting aside the specific issue of same-sex marriage, the simple fact of the matter is that, while Ms. Davis absolutely has a right under the First Amendment to the Constitution to practice her religion, the Rowan County Clerk has an obligation, under that very same First Amendment, not to “establish religion” through public policy.

In short, when Ms. Davis swore that oath, she placed those two elements of the First Amendment – the right of the individual to freedom of religion vs. the obligation of the government to not enforce a particular religious point of view – in conflict. On her free time, outside of her job responsibilities, Ms. Davis still enjoys all of the protections of that First Amendment liberty. However, as soon as she steps into that office, and is acting as an agent of the government, she must abide by the government’s obligation not to enforce a particular religion.

If she can’t, or won’t, do that, she must resign as being unable to fulfill her duties. Period. The oath she swore requires it. And that would be just as true if her Muslim religious sensibilities prevented her from issuing marriage licenses that are legal under Kentucky law, as it does because of her Christian faith.

Note that this is a very, very different thing than a private citizen or business doing the same thing. In that case, there is no obligation not to play religious favorites (in fact, quite the opposite, as the First Amendment’s freedom of religion clause remains in effect), and I am firmly of the belief that a sincerely held religious belief should allow a private business owner to refuse to undertake whatever custom he or she wishes to refuse. That’s an argument for another day, however, and one that has not yet been tested to completion in the courts. 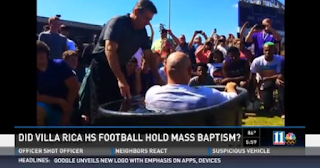 The other case, which is actually very similar to the first, is the Villa Rica (Georgia) high school football coach who instigated a mass baptism before a football practice, which included 18 players and one assistant coach. The Freedom from Religion Foundation found out about it when someone posted the video on YouTube, crowing about “how God is still in our schools!”, and sent a C&D letter to the school, asking that the coach be punished and the practice stopped.

Now, there are some essential differences between the two cases:

Now, that said, there is one essential commonality:
No less than an English teacher, or a Principal, or a Judge, a football coach at a public school is an agent of the government, and as such falls under that same injunction that all agents of the government must observe; they cannot push a specific religious agenda as part of their official duties. And the courts have ruled that in a school environment, the strictures are even tougher, because children are more vulnerable to being manipulated by authority figures.
Now, it may be quibbled that the baptism happened before the practice. But that begs the question, how did the team know to get there early? Did they all just happen to show up, or were they told (or asked) to do so? If the latter (and no one would honestly believe the former), then it was a de facto official event, and the coach was being coercive. Don’t think so? Imagine what happens to the one kid who, when the coach of the football team, which is by definition supposed to be an integrated unit that is used to obeying the instructions of their authority figure, asks him to show up early for practice and he says no.
Is he going to be treated as an outsider by the rest of the team? Is the coach going to (either overtly or otherwise) censure that kid? In a high school environment, how many kids are going to have the courage to be The Other, and how many are going to do whatever they can to fit in and be popular?
That’s coercion, but it’s also besides the point. Even if every single one of those kids did genuinely volunteer to be baptized by their high school football coach at a practice, it would still be illegal. Let him do it at church on Sunday, when he’s not acting in his official capacity as a government agent, but in his individual capacity as a private Christian citizen who wants to get ’em while they’re young.
Not good, but not illegal.