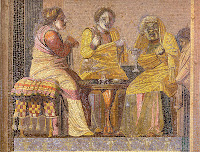 The ancient Romans were famously religious people. Their faith was expressed in myriad forms, both privately and publicly  and was tied to what we today would call the “secular” functions of the state. Notable (and not-so-notable) decisions were undertaken only after determining the favor of the Gods, and every home bore a shrine to the Gods of the household (the lares).

That said, the Romans differentiated between religio, which was the “proper” expression of religious practice that contributed to the peace and prosperity of society, and superstitio, which was taking religion to an uncomfortable and improper degree. When the Romans say you’ve gone off the deep end religiously, you should pay attention.

There was no hard and fast line between what was considered religio and what was superstitio. Like pornography in the modern era, “you know it when you see it”, but in the case of superstitio, it might be appropriate to add “in others”. Rarely do we see ourselves as going too far, being over-the-top, or otherwise anything other than completely appropriate in our religious observances.

What one person might deem respect and piety in themselves, another might see as a dangerous obsession. When someone sees themselves as a good role model, others may see them as going off in bizarre and obscure directions. One man’s deity centered practice is another’s self-centered focus on channeling a deity in what should more properly be a shared group experience. And so forth.

The point of this is that, in the modern world, no one has a lock on religio. There is no One True Way that the College of Pontiffs can declare to be religio, and other shocking practices that are then declared superstitio, to be repressed with vicious, holier-than-thou invective.

Similarly, when we share our thoughts on how we approach ritual, or which beings are or are not appropriate to honor, or the relative balance of personal insight vs. academic research, it should always be done with an eye towards remembering that there are going to be other people out there who believe differently.

We learn by engaging with those with whom we disagree, and heaping scorn on such people, treating them as pitiable wretches, or claiming they are only play-acting, merely because they don’t match our own expectations or agree with our perceptions of what is proper, is counter-productive to such an will certainly not lead to constructive conversations.