One of the problems with practicing a “reconstructed” religion like Ásatrú is that its beliefs and practices, by definition, have been kept in a fossilized state until relatively recently. Because of this, they have not undergone the sort of slow, society-driven changes that religions with an unbroken history of practice, such as Christianity and Judaism, have. Thus, many of the beliefs and practices of Ásatrú are considered not only antiquated, but in some cases downright unacceptable or even illegal.

The practice of animal sacrifice is a prime example of this conflict between tradition and modernity. That animal sacrifice was a central part of the religious life of the pre-Christian peoples of northern and western Europe cannot be denied; archaeology, history, and linguistics all agree. But in the modern world, slaughtering a pig in one’s suburban backyard, especially in a religious context is a highly dubious prospect (although I’ve personally been present at precisely such an event).

Not only are most modern people ill-equipped to perform the ritual (unlike in ancient days, when more rural lifestyles meant many more people were familiar with the basics of killing and dressing livestock), but social pressure against doing so is enormous. In some jurisdictions there are also legal obstacles that need to be overcome (although the US Supreme Court has ruled in Church of the Lukumi Babalu Aye, Inc. v. Hialeah (1993) that animal sacrifice is a protected form of religious expression under the First Amendment to the Constitution). 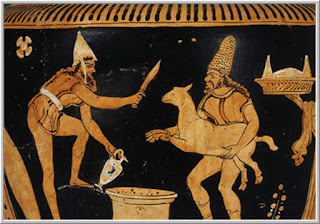 In this example, most Heathens opt to simply not perform animal sacrifices (option 1). Indeed, the form of blót performed by most Ásatrú groups today can be seen as a sort of faux sacrifice, with mead being used instead of the blood of the animal to “redden” the participants by sprinkling them. Some few, who have the benefit of training and/or private land where such rites can be conducted in relative privacy, continue to do so (option 3). Ásatrú as a whole is a large enough tent to accommodate all three strategies for dealing with these sorts of issues.

For myself, I tend to want to lean in favor of reconstructing the elder practices, and the desires of modern society be damned. Unless there are clear-cut legal prohibitions (such as the case of human sacrifice), I am of the school that holds that part of Ásatrú is the attempt to recreate the ancient pre-Christian Heathen mindset. And part of that effort means that modern mores (whether they be neo-liberal “social justice” or neo-Victorian social conservatism) must take a back seat to the ancient beliefs of our ancestors. This doesn’t mean I am against all innovation or change, but I think to immediately jump to change, without even giving the elder practices a chance to work in practical terms, is a mistake. Those ancient practices and beliefs were born of hundreds of generations of trial-and-error, and to turn our backs on that source of collected experience and wisdom seems unwise at best.