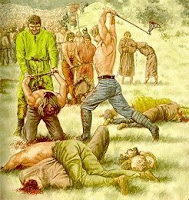 Over at Zeal for Truth (a Christian-Libertarian blog; not normally on my reading list, but this particular article came up on one of my Google news alerts), Bryan wrote an interesting article proposing that Christianity espouses a mindset wherein weakness is extolled as a virtue and strength, honor, etc. which are held up as ideals in Norse paganism (and, for that matter, most of the pre-Christian cultures of Europe, including the Roman Empire in which Christianity first gained a foothold). He goes on to opine as to why the Norse were eventually converted:

There can be only one answer; those who choose Christianity over Norse paganism have come to understand that they have no strength. One who is sure of his own strength will never choose Christianity. This is what is meant when Christian speak of brokenness. Unless one has tried to live like a Norse warrior and failed they will always reject the Christian worldview. Until one sees their own strength as an illusion they will continue to embrace it. In this Christianity is a religion of failures.

I believe some of Bryan’s central premises to be flawed. Speaking as one of those afore-mentioned folks who still worships Odin and Thor, and who daily attempts to consciously regain the ancient pre-Christian Germanic mindset (and also to instill it into my daughter), Bryan’s characterization of the conversion of the Germanic nations is simply incorrect from an historical perspective.

Take, for example, the actions of Charles the Great (aka Charlemagne), who slaughtered 4,500 Saxons at Verden purely because they had been caught practicing their ancestral religion, in the course of a general military campaign to forcibly convert the Saxons to the Christian faith. Similar scenes were found in England and Scandinavia, where those who refused to convert were put to the sword or worse.

It is also the case that Christianity itself underwent a transformation as it encountered and attempted to impose itself on the Germanic peoples of the North (of whom the Norse were but one example). The Germanic ideals of strength, courage, honor, etc. all ultimately found their way into what could be considered the “mainstream” Christianity of the time. An excellent scholarly book on the subject is “The Germanization of Early Medieval Christianity” by James Russell (Oxford, 1996).

One example of this transformation is the Anglo-Saxon poem “The Dream of the Rood”, which is styled as the thoughts of Jesus’ cross itself on its role in the crucifixion. In that quintessentially Germanic view of Jesus, he is described as the leader of a war-band, displaying the standard Germanic qualities of heroism, strength, etc.

The historical process was the opposite of what Bryan proposes in his article; the Christians were deliberately making their faith look like that of the Germanic peoples, in order to make the conversion process more appealing (this “bait and switch” approach is also seen in the campaign to tear down Pagan holy sites and replace them with churches at the specific behest of Pope Gregory I). When that failed, the Christian leaders would not hesitate to stoop to violence (and, in the case of Iceland, economic blockade) to achieve their goals. In the end, that hard-sell approach brought about fundamental changes in the Christian religion that are still seen today.

In retrospect, I can see why Bryan took the tack that he did. From his perspective, Christianity is “right” in an objective sense, so he must needs try to explain the conversion of the Norse (whom, he seems to realize on an instinctual level but could never conciously voice, have a world-view and religious perspective that is more vibrant and dynamic than that of Christianity) from that view. Thus, he describes the Norse as meekly realizing the truth of Christianity and going on their merry way. The historical facts, of course, are at odds with this conception, not the least, I believe, because Christianity is not “right” in any sort of objective sense, and needed to adopt the tactics of power, deceit, and oppression in order to establish its hegemony over the indigenous faiths of northern Europe.

While I would not say that those faiths were objectively “right”, either, I do believe it is fair to say that they were “right” for the people who were practicing them at the time, and, naturally, for many of us today.