We have some updates on Paganism’s Pedophilia Problem.

The diddlin’ fiddler from N’awlins, Pagan community favorite, Wiccan priest, and convicted child pornographer Kenny Klein, was sentenced last week to twenty years. The judge noted, “that you are a renowned artist, teacher and leader — a high priest in the Wiccan community.”

And how did that community respond when the sentencing was in the offing?

Criminal District Judge Byron C. Williams imposed the sentence after first denying Klein’s motion for a new trial. The judge said he had never before received so many letters both in support of and opposed to leniency for a defendant before a sentencing decision.

“Your partner talks about your kindness and others say you don’t pose a threat to society,” Williams said. “But just as many have negative things to say about you, calling you an objectionable human being, and a lot of people contend you are a monster.

It seems that just about half of the Wiccan and neopagan community wanted leniency for this piece of human debris, even after he was convicted of twenty counts of either producing or possessing with intent to distribute, child pornography.

But that’s not all…

In response to the plea deal of Ar nDraiocht Fein (ADF) Deputy Regional Druid for North Carolina and organizer of ADF Raven’s Hollow Protogrove, Scott Holbrook, who recently plead no contest to multiple counts of “distributing obscenities” (also involving children, apparently), the ADF issued the following carefully worded statement regarding his status within the ADF: 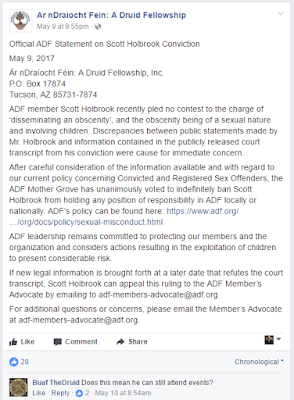 After careful consideration of the information available and with regard to our current policy concerning Convicted and Registered Sex Offenders, the ADF Mother Grove has unanimously voted to indefinitely ban Scott Holbrook from holding any position of responsibility in ADF locally or nationally.

So one of the largest and most prestigious neopagan organizations in the country lays it out on the line. If you’re guilty of distributing nude photos of children, you’re still welcome at events. You just can’t run them.

First half of the neopagan community rises up for leniency for one of their leaders who is a convicted child pornographer, and then a leading neopagan organization says that one of its leaders who is guilty of distributing nude photos of children.

Neopagans, you have a long way to go before you can dare stand in judgement against the Asatru community for whatever faults you perceive within our ranks. You need to shut the fuck up and deal with the half of your own population who thinks child pornography is a crime that deserves leniency. Even — especially — when it’s one of your own leaders, and that person is well-known within the community for, shall we say, his indiscretions in that direction. And then you need to deal with your most prominent organizations, who are willing to tolerate the presence of people who distribute naked pictures of children, and issue clever statements banning them from “leadership” but not from being events.

Events where kids are also welcome, it seems.