It may seem obvious, but it is worth pointing out that we live in a modern world that is “post” quite a few things. But as with most such “post-” designations, that doesn’t mean that the thing that the world is post- is necessarily completely gone. Going back to a Germanic (Heathen) mindset requires the shedding of many different layers that have accumulated over the centuries. 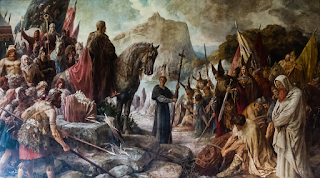 We live in a post-pagan world. Christianity, either of the Catholic variety in the west and north, or Orthodox variety in the east, took care of that in Europe with great gusto, attempting to replace not only pagan religious forms but social ones as well. But elements of the pagan folk-religious memeplexes* remained, whether in folklore and folk customs, covered with a Christian veneer, or even recorded in written form by pagan or Christian authors.

But we also live in a post-Catholic world. Thanks in large part to the Church’s own failings, the Protestant Reformation and the emergence of the Church of England profoundly shook European culture, and many of those pagan customs that had survived as folklore, folk custom, or which had been Christianized, were lost. Much written lore was also lost (as in the dissolution of the monasteries in Henry VIII’s England).

But then came the Enlightenment, and now Europe found itself in a post-Christian world. Radical concepts like democracy, the scientific method, and evolution set the stage for a fundamental undermining of mass confidence in religion to order society and provide personal meaning. Ironically, this brought with it a renewed interest in pre-Christian (pagan) art forms, writings, and philosophy. 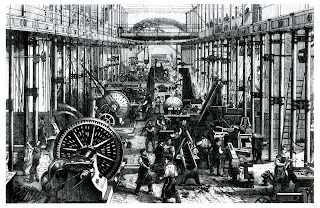 But then came the Industrial Revolution, and now we were in a post-Enlightenment world. Mass production overwhelmed individual craftsmen, and utilitarianism and ruthless efficiency trumped aesthetic value. The last vestiges of the pagan customs that had endured all these centuries were nearly wiped out as the masses moved from agrarian communities where these practices and beliefs were maintained, into large cities to work in factories, which left no time or place for such frivolities. It was at this time, just as folklore and folk customs were disappearing, they were preserved by enthusiastic folklorists across Europe, such as Jakob Grimm. Two world wars served to sever those last links to the deep past, except in self-conscious revivals, with but few exceptions.

And now, of course, we are living in an Information Society post-Industrial world. One in which information is key, and available to anyone on a global scale instantaneously. The bywords for Western society (and increasingly much of the rest of the world) are radical individualism and relativism. There is a near-infinite choice of options literally at one’s fingertips, so tradition, whether 50 or 5,000 years old, is rendered devoid of meaning.

So where does that leave us? How do we “radical traditionalists” respond? We peel back the layers, one by one.

It starts by returning to a pre-Information Society mindset. Rediscover the value in tribe and family, and recognize that there is value in tradition for its own sake, precisely because it is tradition. We tune out the vapid mass culture blather and rediscover things like reading and conversation. 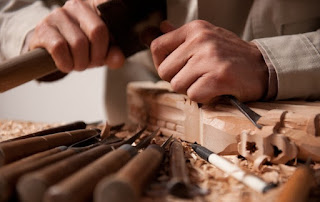 It continues by looking to a pre-Industrial world-view. Regaining an appreciation for craftsmanship, and honing our own skills. Homemade, slow food rather than processed fast food. Hand-made furniture and art. We should try to choose the hand-made over the mass-produced, even though we realize it might cost more. We gain other intangible benefits in return.

We then look for the pre-Enlightenment world-view. Open our hearts and our minds to a world filled with magic; a world of land-wights and gods, where rights brought with them responsibilities, and where it was recognized that science should not drive society, but serve it.

And the process continues on and on til we finally get to a pre-Christian mindset. Where tribe and clan matter. Where honor replaces blind obedience and shame replaces sin. Where sex is not a source of embarrassment or shame but is embraced. Where we are one with the world, not seeking to separate ourselves from it, whether spiritually or technologically. A world where we can fulfill our natures with the gods, and with ourselves.

* A memeplex is a collection of interdependent and intertwined memes (core idea concepts). Christianity, for example, is a memeplex that consists of many different memes.

One thought on “Our post-x world”