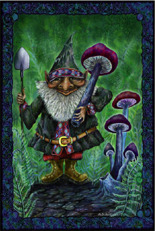 I love the landvættir. For many years, now, I’ve been making regular offerings to the local land-wights, establishing relationships with them, and giving them the attention they deserve. Possibly I’m the first person in 200 years to do so. One I’ve even named, based on the name given to them by the aboriginal Americans who lived in this area of the country, and recently had the honor of being visited by her in a lucid dream very recently.

Since its inception, Asatru has tended to be god-specific. That is, the emphasis has been on the Aesir, Odin and Thor and Freyja and all the rest, and although the landvættir sometimes get name-checked, people and rituals honoring them specifically are few and far between. Most often, it consists of giving them a plate of food from a feast, or the remains of the horn at sumbel.

I personally think this is a great mistake.

There is evidence that, even though the Aesir might have been the ones who “got all the press” — i.e., the ones whose stories and myths survived the Conversion — the ordinary folk treated the landvættir as the ones with whom they had the closest personal connection. It’s certainly true with the house-wights; the tomten, nissen, etc., as might be expected. But when you start looking into the vast, and I mean really vast, corpus of lore surrounding the elves, dwarves, huldefolk, and other land-wights that populate the folklore of Scandinavia, Germany, England, France, Spain, and Italy (all of which were places of Germanic population to one degree or another, and in which it’s possible, if difficult in the latter examples, to tease out the Germanic from the Roman or Celtic influences), it’s apparent that our ancestors really had a rich and complex relationship with the local land-spirits.

That there was a cultus surrounding such beings is beyond dispute. The particulars of that practice are well-attested and easily de-Christianized. It’s all just waiting there to be reintegrated into our religious practice as Asatruar.

I don’t suggest that our relationships with the Aesir be abandoned – far from it! But I do think we need to re-establish those connections with the local land spirits, those gods of place who exist all around us, Gods, by their nature, are concerned with the Big Picture. They operate on a level far above ours. The land-wights and house-wights, on the other hand, operate on a level far closer to our own. They, to an extent, understand our needs, which mirror their own, and can more easily relate to us.

These are the spirits that can be approached for everyday needs; felling trees, hunting, farming, maintaining a home, fishing, earning a living, and so forth. And they respond excellently to the Germanic Gift Cycle, which forms the basis of most of our relationships both on a human level as well as a divine level.

There appears to be a resurgence in interest in these entities. Several excellent books have been published recently about them, and the material is rich and well worth investigating. Let’s start adding a real cultus surrounding the landvættir to our fairly well-developed cultus surrounding the Aesir. Such a relationship worked well for our ancestors; and in my own personal experience, it works well in the modern day as well.