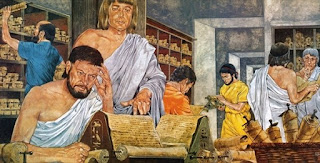 When the same issue shows up in three different places that I read regularly, there’s something definitely afoot. So it was with the question of what I call mysticism (alternately called UPG or “polytheism” by its proponents) being perceived to be in opposition to scholarship when it comes to Asatru specifically (although the argument would work just as well with other forms of Heathenry or Paganism such as the Religio Romana or Celtic Reconstructionism).

There’s a lot to unpack in those posts (and it should be noted this is an issue that is not new by any stretch of the imagination; indeed, it’s been kicking around in one form or another since the 1980’s at least), but I’m willing to give it the old Collegium Augurum try…

First and foremost, I’m not a fan of the strict delineation between “UPG” and scholarship, which I think is implied in the very term UPG as it is used today. UPG today is most often used for some sort of direct inspiration from a deity or spirit, often lumping scholarly insights that don’t rely on direct evidence in the same category as “revelations” from the gods, and ignoring the vast spectrum of scholarly possibilities into the bargain. That’s one reason I prefer the term “mysticism” to specifically refer to those insights which are the result of direct revelation from some god or spirit, to differentiate them from more mundane insights or outright inventions.

Secondly, I am not a fan of the way that certain individuals use the term “polytheist” with such an emphasis specifically those people who are superstitious (to use the term in the Roman sense*) when it comes to religion. They are the god-spouses, the ones who hear the gods and land-spirits talking to them on a daily basis, and (most relevant) the ones who in the last couple of years have indulged in a campaign of claimed persecution, believing themselves to be somehow sidelined or ostracized by the greater Pagan and Heathen communities. As such, they have begun to set up parallel institutions, such as the Polytheist.com website, sponsor conferences, and so forth.

Those are good and worthy things, but personally, I think their claims of persecution (to the point where they characterize their movement as a “human rights” campaign) are vastly overblown, and I resist their increasingly exclusive claim on the term “polytheist”; they are at least paying lip-service to the idea that there are polytheists who aren’t god-touched, which is a good thing. But a polytheist is anyone who believes in multiple gods, period, whether they be constantly chattering in one’s ear or relatively removed from one’s daily life. Again, this is one reason I like the word mystic, or mysticism, in this context; it serves to differentiate the one from the other, which I think is the ultimate goal. (Modern Icelandic dulhyggja is a great word, by the way; the literal translation could be “secret understanding”.)

Next up: I will address the actual issues brought up in those posts; specifically, whether the mystical/magical and scholarly aspects of Asatru (etc.) are necessarily in conflict. I just wanted to get these framing issues out of the way, so any discussion around them might not distract from the main point.

_____
* The Romans applied the term superstitio to all those who took religion too seriously, to the point where it would interfere with making practical decisions in daily life. As the Oxford Classical Dictionary (3rd Ed.) puts it: “Superstition meant a free citizen’s forgetting his dignity by throwing himself into the servitude of deities conceived as tyrants. The civic ideal of piety (see PIETAS) envisioned above all honoring the gods while preserving one’s freedom – that is, with restraint and measure. Thus the superstitious were supposed to submit themselves to exaggerated rituals, to adhere in credulous fashion to prophecies, and to allow themselves to be abused by charlatans.”