In Hervarar saga ok Heiðreks (The Saga of Hervör and Heidrek), we read of Hervör, a woman who spent much of her time living as a man.

Hervör is the daughter of Angantýr, who was one of twelve berserker brothers, and had in his possession the magical and cursed sword Tyrfing. At her birth, it was noted that she wasn’t like other girls:

Bjarmar’s daughter was with child. That was an exceptionally fair lass. She was sprinkled with water and given a name and called Hervör, but it was the opinion of most that she should be left outside, and they said she wouldn’t be too ladylike if she took after her father’s kin.

Needless to say, Hervör does indeed take after her father’s berserker-brothers.

She was brought up with the Jarl and was as strong as the boys. And as soon as she could do anything for herself, she trained more with shot and shield and sword than sewing or embroidery. She did more bad than good too. And when these things were forbidden to her, she ran into the woods and killed men for their money. And when the Jarl hears of this highwayman, he went there with his troops and caught Hervor and brought her home, and then she stayed at home for a bit. 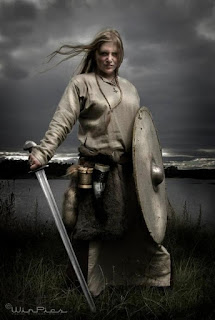 Note that there’s no reference here to any specific gender role expectations that were being broken. Rather, the strong implication is that she is forbidden to be manly because “she did more bad than good.”

And note also that when she was captured after her adventure in the woods killing people and taking their stuff, she wasn’t executed, but merely brought into the Jarl’s home again.

She discovers the truth about her parentage, and of the magic sword owned by her father, and assumes the (male) name Hervarðr:

Then she got ready to leave alone with the gear and weapons of a man and made her way to where some vikings were and sailed with them for a while and called herself Hervard.

A little later, the captain died and this ‘Hervard’ took command of the crew. And when they came to the island of Samsey, ‘Hervard’ told them to stop there so he could go up onto the island and said there’d be a good chance of treasure in the mound. But all the crewmen speak against it and say that such evil things walk there night and day that it’s worse there in the daytime than most places are at night. In the end, they agree to drop anchor, and ‘Hervard’ climbed into the boat and rowed ashore and landed in Munway just as the sun was setting.

She then proceeds to challenge her dead father’s ghost for possession of the magic sword Tyrfing, and wins it through her boldness and courage in a famous episode often called Hervararkviða. She then goes on with her life as Hervarðr for many years:

Then she went to the ships. But when it got light, she saw that the ships were gone. The vikings had taken fright at the thunders and fires on the island. She gets herself passage from there but nothing is known of her journey till she comes to Godmund in Glasisvellir, and she stayed there over winter and still called herself Hervard.

One day, as Godmund [a king of Jotunheim] was playing chess and was on the verge of losing, he asked if anyone could help him. Then ‘Hervard’ went up and advised for a little while until things were looking better for Godmund. Then a man picked up Tyrfing and drew it. ‘Hervard’ saw that and snatched the sword off him and killed him, then went out. The men wanted to run after him.

But Godmund said, “Settle down, there won’t be as much vengeance in that one as you think, because you don’t know who it is. This woman will cost you dear before you take her life.”

Note here that the king knows well that ‘Hervard’ is really a biological woman, but doesn’t begrudge her the male persona she has adopted. But her return to female life is presented as a conscious choice:

Then Hervor spent a long time in warfare and raiding, and had great success. And when she tired of that, she returned home to the jarl, her mother’s father. From then on, she went along like other girls, weaving and doing embroidery.

Now, it is important to note that this is one of the fornaldarsögur (“legendary sagas”), presumably dating from around the 13th century, with the oldest manuscript copy coming from the late 14th/early 15th centuries. Fornaldarsögur are not generally noted for their historicity (as compared to the Family Sagas), but rather reflect what an author 200 years after the Conversion imagined pre-Conversion society to be like.

However, it’s also important to note that this actually works in favor of the story of Hervor, at least in the general sense, reflecting reality. The oldest existing Icelandic law book, called Grágás (“Grey Goose”) specifically bans women dressing and acting as men almost exactly in terms that could describe Hervör:

Staðarhólsbók, one of the existing versions of Grágás, prohibits a woman from wearing male clothing, from cutting her hair like a man, bearing arms, or in general behaving like a man (chapters 155 and 254), however it does not mention behaving sexually in the male role.

But here’s the kicker. Staðarhólsbók was written about 1280 CE. That’s the late 13th century. Around the same time that the saga itself was composed, and nearly 300 years after the official conversion to Christianity. I believe the inclusion of those prohibitions are Christian, rather than Heathen, in nature. It would make a lot of sense; if the Christian author of Hervarar saga ok Heiðreks wanted to portray life as it was in pre-Christian times, he would naturally have characters doing things that were anathema to Christians, in order to play up their nature as Heathens.

Just as the early law codes and penitentials guide us to pre-Christian practices through their prohibitions, so too does Staðarhólsbók, written well into the Christian era, and which specifically prohibits the practice of women living as men. What we in our modern world label as transgender.

That said, I am by no means trying to overstate the case and claim that this is something that was normative in Norse or broader pre-Christian Germanic society. It was doubtless a rarity, given the sparse sources that reference it outside of this late but detailed case. But neither was it something specifically banned or viewed as “unnatural”; gender and sexuality in Germanic society prior to the coming of Christianity was a much more complex thing than the reductionist Christians (and, much later, the very puritanical and sexually repressed Victorians who inform our ideas of sexuality to this day) might insist.

Historical pre-Christian Germanic society viewed sex and gender very differently than we do today. They didn’t share our Victorian squeamishness about the subject, and almost certainly didn’t view the so-called “traditional family” of a man, wife, and kids (the modern “nuclear family”) as normative, either. Families were extended, and the interrelationships between family members were very different than they are today (how many boys have the sorts of intense relationships with their uncles that are constantly described in the Sagas, for instance?).

I don’t say it was, or is, normative. I don’t say it’s something that was, or should be, embraced as a widespread thing. But it seems clear that at the very least women assuming male roles for a lengthy part of their life wasn’t completely unknown, and wasn’t banned (unless the specific individual was a complete jackass) until Christianity came along with its ingrained hangups about sexuality that we’re still dealing with today.