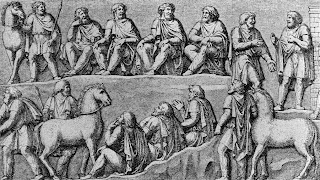 One of the things with which modern Ásatrúar and other branches of the modern Heathen family are blessed is a comprehensive and effective means of moderating conflicts between individuals and groups. The Icelandic Sagas, Eddaic Poetry, and other sources of written lore give us a plethora of examples that can, and in my opinion should, be used to resolve conflicts between modern Heathens.

First, we must turn our sights to the ancient concept of the innangarðs and the útangarðs.

It should be taken as axiomatic that members of a tribe, or other social grouping, would form a coherent block of support for any individual engaged in a dispute with someone outside the group. So, to take an example, if an East Angle had a dispute with an East Saxon, he could reasonably count on his fellow East Angles to support him in that dispute (just as the East Saxon could count on similar support). Crossing tribal boundaries, and supporting someone in the útangarðs against someone in the innangarðs would be next to unheard-of, and would certainly require some sort of extraordinary circumstance, such as sworn oaths of loyalty leading to conflicting allegiances.

That said, it is certainly not the case that the only sort of resolution of conflicts between individuals, families, clans, or tribes is the feud. A long and deep tradition of shild, the payment of monetary recompense for wrongs or other crimes, up to and including murder (where it is termed wergild), is evident throughout the lore. We see it in examples in the Sagas of Icelanders, and built into the Germanic law codes that stem in their earliest forms from the unwritten tribal codes of conduct (“thew” in the contemporary Théodish parlance). For every wrong there is a price that can be paid to make it right.

In cases where the wrongdoing was laid out plainly in the code of law, the issue was simple. A price was specified, and upon payment the crime would be absolved and the matter settled. The wronged party explicitly gave up any rights to vengeance once the shild was paid. So it is in contemporary Heathenry. Once shild is agreed to and paid, the wrong is completely wiped out, frith (peace) is once more obtained, and no one on either side has a right to complain about the act or its consequences in the future. Failure to abide by these strictures is the chief reason that feud could result; society because out of balance once the implications of a paid shild were ignored (or where shild, which might have restored balance, was not paid in the first place).

For cases where the code of law did not lay out a specific price for a specific wrong against someone, there was yet again a way to make it right. There are three ways that a dispute could be resolved; samning, sjálfdoemi, and jafnadardórmr. The point is that both sides, no matter the mechanism, arrive at a mutually acceptable price. Once the price was named and paid, the matter was done. It could be as little as a handshake and an apology, or as much as land and gold. Whatever the specifics that are agreed to, once the shild is paid, the matter is done and any further claim of vengeance was invalid.

There are two places the system breaks down.

The first is in situations where the wrongdoer fails to acknowledge the wrong done. That was the definition of murder in ancient times – to kill someone without owning up to the deed. To kill someone and acknowledge the fact to the next person one saw was, in fact, the honorable and correct thing to do. In such a circumstance, one could then pay a reasonable shild and restore the balance and the peace of society. But if one denies that a wrongdoing has been made, then there is no basis for negotiation.

The second is when arbitration is attempted, but spurned. Such spurning could take the form of either a direct refusal to negotiate, or the setting of some shild that was so obviously outrageous (either outrageously high or low) that it was obvious to any impartial observer that there was no negotiation being made. As a rule, this required something of a history to actually be established – someone with a history of this sort of behavior was named an ójafnaðarmaðr (“one who does not deal fairly”), and his reputation suffered accordingly, sometimes fatally in extreme circumstances. 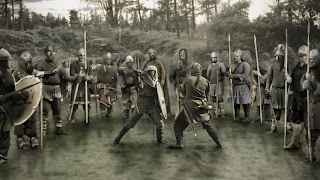 When the process of negotiation has broken down, despite the efforts of at least one party to make it work, then our ancestors were forced into more violent means to resolve their conflicts. Feud, einvigi, and holmgang. The particulars of such are outside the scope of this particular article, but it should be noted that the potentially deadly outcomes of duels render them relatively moot in terms of modern practice. There is no tradition of “foam swords at dawn”, and the threat of physical harm or even death is not something that can reasonably be removed from the equation. Without that potentiality, it becomes a non-option in modern society. So arbitration and compromise become our modern options, and if they fail, we resort to feud. Fortunately, feud in our modern world ends up being insults and accusations hurled across email, and that, in and of itself, does not imbalance society.

2 thoughts on “On Conflict Resolution”