Back in 2005, researchers Christian Smith and Melinda Lundquist Denton wrote Soul Searching: The Religious and Spiritual Lives of American Teenagers. In it, they try to figure out what American teens thought about religion through interviews with about 3,000 teens, and in particular were coming from a standpoint of evangelical Christianity. That perspective doesn’t invalidate their findings, although it does color their conclusions, of course.

Aside from the hand-wringing about the future of traditional Christianity in the West, the big takeaway from their research was what they refer to as Moralistic Therapeutic Deism (MTD), which I think has broader implications than mere Christianity. MTD can be broken down into the following precepts:

While there’s a deep chasm between “everyday Asatru” and what might be termed “Deep Asatru“, I confess I see many parallels between these beliefs and a lot of what I see in modern Asatru. All too often I find people writing on blogs or even in person who essentially believe in a Heathen analogue of MTD. I think it comes not as a reaction to Christianity in particular, but as a result of the constant movement of society towards a secular, postmodern, hyper-individualistic form. The Asatru equivalents might be:

In short, they want “nice guy” gods who make few, if any, demands of them, are there to be a source of comfort and problem-solving, but who otherwise don’t get in the way of everyday modern, consumerist, life. 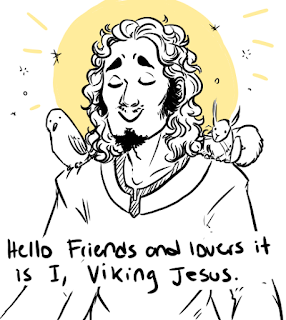 This is the mindset that insists that ancestry has nothing to do with religion. After all, it’s not “fair” to exclude anyone.

It’s the mindset that tells us that the afterlife is an open field, and you go wherever your favorite god lives, despite there being no support for that at all in the written lore. Putting everyone into Hel would risk making people not feel special!

It’s the mindset that tells us that asking the gods for petty services and favors like asking Njörðr for help finding a parking space is a perfectly acceptable thing to do*. After all, the gods are there to be our friends and helpers!

I’m sorry my ducklings, but the gods don’t work that way. And it’s about damn time we started taking the time to explain that to people, rather than keeping silent and letting them persist in their self-absorbed delusions.

Our gods are hard, demanding, and ultimately alien figures in the sense that they operate on a level of understanding that we quite literally cannot comprehend. They have their own motives, their own objectives, and they’re not always what we might want them to be, or even take our needs and wants into account. They are gods who make enormous demands of us, ripping us away from the things we find comfortable and tossing us into situations that test us to our very marrow.

“Life is Ordeal,” as the Theodish say.

And not because those demands and expectations are designed to help us evolve or improve or because it’ll be good for us in the end. Because They want us to do it for their own reasons, which might be completely unfathomable and inscrutable to us. They’re the ones who have insights into the skein of wyrd, and They have motives that are utterly beyond us. They’re not above killing us in our prime to bring us into Valhalla just in case the Ragnarök comes tomorrow, even if we would have otherwise won the battle. And for the record, not everyone who dies in battle gets to go there; you have to be chosen. And chances are, you won’t be. Suck it up.

And it’s fucking time we accepted it, taught it as the expectation to our Folk, and embraced it as a whole. Want to know why the ancient Germanic peoples are so often described as “fatalistic”? That’s why. The Æsir are not our friends, not our buddies, not our butlers, and not our self-help coaches. They are our gods as well as our ancestors, and that should be enough.

* I shit you not, I actually know someone who did this and thought it was the cleverest thing in the world, because Njörðr is the god of voyages and obviously has nothing better to do than to arrange the universe so she didn’t have to drive around the block a couple of times. ::double sigh::