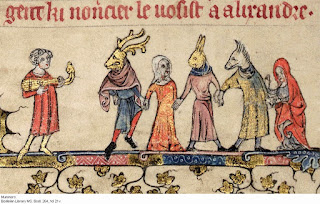 So Thor and his goats (now in the form of the krampus) have come to reward good children and punish the wicked (December 14); Frig/Holde/Perchta has made sure the farmstead is ready for the coming winter season, the Wild Hunt is about in the land (make sure you have saffron buns with you if you need to go about at night between now and Yule, to throw over your shoulder and elude the hunt), we’ve held a vigil to make sure that Sunna comes back on the longest night of the year (December 21); and the Yule ale has been laid down (December 28).

What’s next? The coming of the New Year, of course!

New Year’s Eve (also known as St. Sylvester’s day), and New Year’s Day (also known as the Calends of January), is a time when the pattern for the coming year is laid down. This is a time not only for divination to see what the coming year will bring, but also positive actions to make sure it is prosperous, healthy, and fertile. The early Christian church was well aware of Pagan customs associated with the day:

…nothing is ominous or ridiculous about the Calends of January. [Do not] make little women [i.e., corn dollies], little deer or iotticos or set tables at night [for house spirits or the Mothers] or exchange New Years’ gifts or supply superfluous drinks. (Life of Saint Eligius, France, c. 650 CE)

Nor celebrate Thursday in honor of Jupiter or the Calends  of January according to pagan tradition. (Penitential of Bede, England, c. 730’s CE)

Hast thou done anything like what the pagans did, and still do, on the first of January in [the guise of] a stag or a calf? (Corrector of Burchard, Germany, 1023 CE) 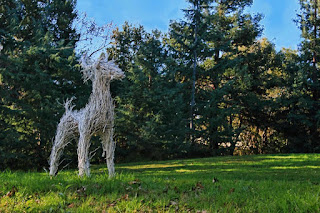 What a wonderful set of descriptions; omens, idols, offerings, gifts, drinking, celebrations, and animal guising. Thanks for writing all that down, guys!

One Swedish custom holds that one should place one cup of water on the table for each type of grain that is grown on one’s farm. The next day, if air bubbles are on the rim of a particular cup, it indicates that crop will prosper in the coming year. Similarly, all across the Scandinavian and German-speaking world, the custom of molybdomancy, or divination by lead (Bleigießen in German), is common on New Year’s Eve. In Europe, kits are sold, complete with a melting spoon, ingots, and a book to help interpret the shapes.

The process itself is simple, and is often done in groups, at New Year’s Eve parties. Small ingots of tin or lead are melted in a long-handled spoon or small pot and poured into cold water. The shapes formed by the quick-setting metal is interpreted for its significance in the coming year. Bubbles represent money, a broken casting represents misfortune, the shape of a ship indicates travel, etc. Such interpretations are necessarily subjective, of course, and it may be helpful to write them down for later review, and cross-check them with other forms of divination. This is the time for it! (Be careful whenever handling molten metal, of course!)

New Year’s Day sets the pattern for the whole of the coming year. Thus, if one receives money on January 1st, the year will be prosperous and will see one’s wealth increase. If one pays out money on the day, however, the year will be lean and one’s wealth will wane. The same principle applies to annoyances or other troubles; if present, they will persist throughout the year. This is one reason that in many parts of Europe and America it is traditional to wish friends, families, and acquaintances well on New Year’s Day. You’re setting the path for the rest of the year.

The weather of New Year’s Day is also a significant indicator of the coming year. A red sky indicates that evil and war will be present in the coming year. Blustery winds indicate an average harvest, but sunshine will presage a pleasant year overall. In Brittany, they take this even further, saying that the prevailing winds on the first twelve days of the year will reflect the winds for the rest of the year, one day representing each month.

The tradition of “first stepping” is also widespread. Basically, the luck of the house is influenced by the first visitor to cross the threshold in the new year. In some regions, dark hair is considered lucky, in others the first visitor must be male, and so on. It does seem to vary widely by region, so no universal Germanic standard can be applied, but it does seem that an “opposite” type from the norm seems to be considered lucky, so in a place where blondes and redheads prevail, dark hair would be sought out for its lucky properties. Sometimes, cakes, sweets, or drink would be on hand to welcome the lucky visitor.

The other tradition associated with New Year’s Day is animal guising, as mentioned in the Corrector of Burchard of Worms. Animal guising has a long and complex history in Europe, and it’s way beyond the scope of this article to cover it all, but I can heartily recommend Nigel Pennick’s excellent book Crossing the Borderlines. It’s not readily available at Amazon, but that link will take you straight to the publisher, where it appears to be available very reasonably. There’s also E.C. Cawte’s scholarly Ritual Animal Disguise, sadly out of print but available on the after-market or in a good university library,

Now, the context and purpose of the guising mentioned by Burchard is obviously lost to us, but I think it can be seen in the other connections to Luck that we see across the spectrum when it comes to New Year’s. I think we’re seeing a reference to a sort of sympathetic magic, similar to that seen in some hunting magic practices. Look at the specific animals that are mentioned: stags and calves. In an agricultural culture that relied on husbandry and hunting, those are the things you want to have in abundance. And, in keeping with the theme of, “as goes New Year’s Day, so goes the year,” having stags present in the community on the first of the year will ensure they are plentiful during hunting later in the year, just as having calves on the day will work towards lots of young cows (and, presumably, other baby livestock, by association) throughout the year.

The straw deer mentioned above in the Life of Saint Eligius would serve the same function, I think. If there are deer around the farm on New Year’s Day, they’ll be around during the year. When hunting deer is an important part of survival, that would be significant.

I would imagine there are dances that are associated with the guising, perhaps some sort of stylized hunt, and stylized farm life scene, but that’s just a supposition on my part. More research into that aspect of the tradition is clearly indicated.

HELPFUL PLANNING TIP: Order your lead-casting supplies now! Prince August Toys has a pre-done kit, complete with booklet, but they’re in Ireland, and it might take some time to arrive. Fortunately, bullet-casting is a very popular thing, and you can get a ladle and led pellets easily enough on Amazon.