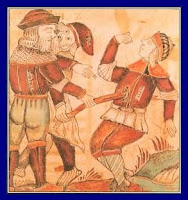 One of the things about Traditional Witchcraft (i.e., non-Wiccan witchcraft, typically but not exclusively found or derived from that in the British Isles) that really speaks to me is its use of the mythological cycle to inform its ritual. That is, the central myth (or perhaps “mystery” is a better term) is that of the continuing cycle of death and rebirth, embodied by the Holly and the Oak kings. During the autumn and winter, the Winter (Holly) King is ascendent, which we see in the ritual slaying of the Summer (Oak) king. In the spring and summer the cycle is reversed, and thus continues on and on. The beautiful part, to me, is that this mythological cycle is represented in the rituals that take place at the key points of the year. There is an “oak king” who is mock-sacrificed as part of the ritual, etc. (Naturally, not all TW groups do this, and many do it somewhat differently and/or with different myths, but hopefully you get the idea.)

One of the things we in Arfstoll Thjod are currently endeavoring to do is to adopt something similar in a Germanic context. In our particular case, there were a number of different myth cycles that we could have turned to as a model. We decided on the death of Balder and the exile of Odin as our myth cycle, and enact a series of ritual dramas throughout the year to highlight parts of the myth. The myth is thus brought into special relevance, as well as adding to the pageantry and overall fun of the celebration. This ritual drama is done in addition to the normal forn/blot and sumbel. I would highly recommend The Origins of Drama in Scandinavia by Terry Gunnell (in print, but unfortunately exorbitantly priced at the moment) for a more in-depth treatment of ritual drama in pre-Christian Scandinavia.

In particular, we mark the following as part of the ritual and mythic cycle:

Midsummer: The death of Balder
Winternights: The wooing of Rindr
Yule: The exile of Odin
Summer-meal: The return of Odin

The myth-cycle is specifically reflected in ritual both in the forn/blot (wherein the celebrant is asked questions directly relevant to the drama that has just been enacted, which he must answer correctly in order to be shown worthy to enter the sacred enclosure, or ve) and the sumbel, where the first toast, normally given to Odin, is given to Uller at the Yuletide, to reflect the change in kingship among the Gods.

It’s something of a change from what I’ve observed and participated in over the years among Heathen groups, but we’re having great success with it as a model. Other groups could certainly choose different myth cycles and do something similar; I’m finding having the additional mythic context only brings out more subtlety and poignancy to our own rituals. I’d be fascinated to hear if anyone else has done something similar.