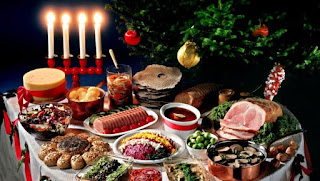 The Yuletide celebration is not just a single day, but a whole season of festivities lasting nearly two weeks.

As our own tribal Yule celebration will be held on Saturday, January 2nd, the start of our Yuletide begins twelve days earlier, on Monday, December 21st. The traditional beginning of the season was called Mothers’ Night in Anglo-Saxon England, and it’s very likely that it was the same as the “Feast of the Parcae” (or, as we call them, Norns or Fates) described by early Christian writers as being a Heathen celebration that they wished to suppress.

As described by those who sought to stamp it out, the Feast of the Mothers (the Norns are also related to the Matronae whose worship is known from hundreds of Roman-era altars in the Rhineland and beyond) consisted of laying out a fine meal for the Fates that guided a family’s past, present, and future.

Bear in mind that every person was said to have their own Norns, which may well be the origin of the tradition of the “fairy godmother”. This meal was left out all night long, and if the Norns/Mothers found it worthy, they would reward the family with good fortune in the coming year.

So the basic connections are:

As this is more of a family or solitary tradition than something done together as a tribe, I present the following as a brief ceremony to accompany your own offering of a Feast of the Norns. It should consist of a regular plate of food, just like you were serving an honored guest in your family, and should be set out on regular dishes (not disposable plates). If you wish, you can recite the following three times to invite your Norns to partake:

The three Mothers traveled to the table,
They found the feast filling;
Meat from the table,
Bread from the board,
Wine from the cask.
Boons brought the Mothers, bright fortune,
Success for the supper they saw;
One Mother was there,
One Mother is there,
Another Mother will be there.
Look upon us with kindly eyes, oh Mothers,
Bless us for the feast we give.

And remember, if the animals in your house partake of the feast, that’s a sure sign that the offering has been accepted. 🙂

If there is anything left in the morning, be sure to set it outside with some care. Don’t just throw it into the garbage; give the animals outside a change to claim it for the Gods.