Hilmar Hilmarsson, current allsherjargoði of the Icelandic Ásatrúarfélagið, recently said: “The gods are of mixed races.”

From time to time, I’ve dealt with this particular canard that the Norse Neopagans keep trying to trot out in an off-handed manner, in the context of other things, but it’s something that appears with the tedious inevitability of an unloved season, so I thought it was about time I took it on directly.

Let’s take this step by step. When someone like Hilmar says “the gods are of mixed races” he is referring to the fact that some of the gods are either said to have parents who are Jötnar (giants) or who are counted among the Jötnar or Vanir themselves and then marry into the ranks of the Æsir. Týr is an example of the former, with the famous account of his visit to his father Hymir’s hall to get a cauldron in which to make mead. Skaði is an example of the latter, the daughter of the slain Þjazi, who marries Njörðr as recompense. 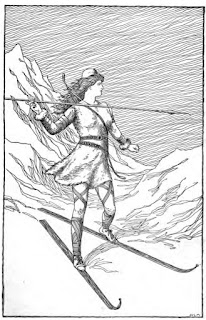 But are the Æsir and the Jötnar different “races”? That depends on the definition of race, of course. The simplest definition is “a group of persons related by common descent or heredity.”

Given the ancestry of the Æsir and the Jötnar, it’s clear that they are of the same “race”. That is, they are all of them descended from Ymir (in Odin’s case, via Ymir’s descendant, Bestla). Odin is also descended from Borr, whose own father Buri was licked out of the primordial rime-ice independent of Ymir, but there is nothing to indicate that Buri and Borr were of any different “race” than Ymir. All were born of the same rime-ice at the dawn of time; Ymir from the interaction of the ice with the sparks from Muspell, and Buri from being licked out of the ice by the cow Auðumbla. The common factor is the ice, and Odin embodies the merging of the two sons of the ice, Ymir and Buri.

At best, the Æsir and the Jötnar are cousins, and are quick to marry within that boundary if it suits their desires or needs. They share a common descent and heredity, and are thus of the same race, according to the definition. We might refer to these individuals as the “sons of Ymir”.

What further attests to this fact is that when a Jötunn (or a Van, for that matter) marries or is otherwise brought into the Æsir, they are called Æsir thereafter. Thus does Snorri refer to Skaði and Loki as Æsir.

So what about other races mentioned in the lore? We have several; the Vanir, the Alfar, and the Dvergar. Unfortunately the vagaries of what has survived makes the question somewhat less than easy to quantify. We don’t know the origin (or, really, the nature) of the Vanir at all. They simply show up to go to war with the Æsir, leave three of their number to join their former enemies, and then disappear from the lore completely, except for a throwaway line in the description of Ragnarök. There is a strong case to be made that the Vanir and the Alfar are the same (see, for example, Alaric Hall’s Elves in Anglo-Saxon England), but it’s far from settled.

The Alfar are similarly mysterious in their origin, although see above regarding their possible association with the Vanir. They are something of a moot point, however, as there are no examples of an Alfar joining the Æsir.*

For both, however, if the genealogy of Ymir’s line is considered to be accurate, then they must be of  Jötunn origin themselves, because there isn’t any other possibility that is described for us in the written sources. Of course, it’s entirely possible that some now-lost legend referred to the origin of the Vanir and/or the Alfar, but that would be pure speculation, and we can’t draw conclusions from it. 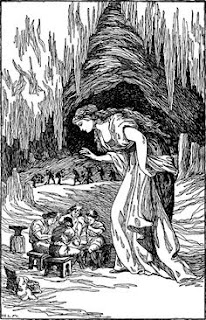 The Dvergar, on the other hand, have an origin which is known to us outside of the continuity of the offspring of Ymir, Buri, and Bor. Snorri tells us they are the maggots who infested the flesh of the slain Ymir, while Völuspá states that they come from “Brimir’s blood and from Blain’s limbs” (both of which could be seen as alternate names for Ymir, and thus reinforcing Snorri’s origin). The point is that the Dvergar are the only group of beings which qualify unequivocally as a separate “race” in the sense of being “related by common descent or heredity.” Everyone else in the lore either comes from Bor or their origin is unknown. The Dvergar give us an excellent opportunity to check to see if there is any example of true, unequivocal, inter-racial mingling in the lore.

And, indeed, there are no instances of one of the Dvergar joining the Æsir, through marriage, adoption, or any other means.

Of course, it is true that we do hear of the goddess Freyja sleeping with the four Dvergar in order to secure the necklace Brisingsamen. But there is nothing in the account to suggest that there was any sort of marriage, no crossing of the boundary between the two races from one clan to another. Indeed, the fact that Freyja did sleep with these Dvergar is held out to be something very shameful, and is used by Loki to taunt her in Lokasenna.

There we are. While it may be emotionally satisfying to try to apply modern notions of “progressive” politics as being the norm as seen by our pre-Christian ancestors, and applying it to the lore concerning our gods, when we actually look at the lore that comes down to us, it turns out not to be an accurate portrayal. Once again, politicization of religion to accommodate some left-wing agenda fails, when compared against the facts.

EDIT: Updated slightly to clarify the point of common ancestry between the Æsir and the Jötnar.
__________

* There is a reference to Idunn being one of the Alfar, but it appears in Hrafnagaldur Óðins, which scholarly consensus holds to be a very late, 16th century, work imitative of the style of the Eddaic poems, but not truly belonging to the corpus. Some disagree, of course, but I’m going with the opinion of modern scholarship. It wouldn’t damage the argument about race either way, especially if they are all still descended from Borr.