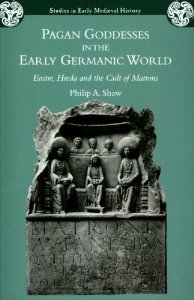 Subtitled Eostre, Hreda, and the Cult of Matrons, Philip Shaw’s 2011 book is a very interesting investigation that attempts to connect two rather enigmatic Anglo-Saxon deities mentioned by the scholar Bede with the well-attested cult of the matrones, which are largely known by a large number of inscriptions on Romano-Germanic and Romano-Celtic altars, mostly in and around the Rhine area.

Shaw is a lecturer in English Language and Old English, and the book reflects his expertise with language. He deftly argues against many previously preferred etymologies for the two goddesses’ names, and makes the case that they are in fact reflective of a cult of triple-goddesses which were either based on locale, tribal/clan name, or a combination of the two.

It’s a slim book and I found it an easy read. Shaw makes his case clearly, if perhaps not decisively (a fact that he himself acknowledges), owing to the fragmentary evidence that remains to us. There is a chapter in the beginning of the book that gives a background in language that is perhaps more than the casual reader needs to follow his arguments, but which someone who is interested in the role language plays in late classical and early medieval culture will find useful.

Shaw can definitely be placed on the “conservative” end of the scholarly spectrum, not being willing to make any inferences that the evidence itself does not explicitly point to. While this is probably a good tendency for the subject at hand, his more general assertions, such as questioning whether deities such as Odin/Woden were pan-Germanic deities at all, err perhaps a little too far on the side of eschewing inference, but do serve as a reminder that many scholars, and especially laymen stating scholarly opinions, often do go too far in connecting dots that may not actually be there.

On the whole, I found this a quick, enjoyable, and informative read: 5 out of 5 stars. It is available from Amazon.com.