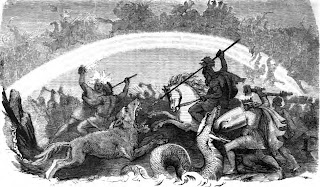 Many Wiccans and Pagans make a point of saying that they are interested in “harmony”, or that they are pacifists, or somesuch. There’s lots of woo about living in peace with our neighbors, or seeking to resolve our differences like reasonable, modern, peaceful people. Some make a great show about how they would never practice “black magic”, never harm another living soul, never coerce anyone into anything, agonize about doing a love spell because it involves forcing someone to do something, yadda, yadda, yadda.

Not me. That is not my religion. Is that yours? Awesome. You don’t practice my religion. Don’t judge me by your standards.

My religion teaches that strangers are fundamentally untrustworthy. My religion teaches that I look out for my family first. Then my extended family. Then my tribe. And then… maybe… my neighbor. You’re not my relative or a part of my tribe or someone I’ve lived next to for ten or twenty years? You’re a stranger. I refer you to the first sentence in this paragraph.

My religion teaches that if someone hits me, I hit them back. Hard. I hit them so hard they never, ever, want to hit me again. If they’re even able to. And I train myself so that I’m able to make that happen. Physically, intellectually, and magically. We each have our strengths, and we each use what we have to help our friends and harm our enemies.

My religion doesn’t shy away from “black magic.” Hel, much of one of the most prominent types of magic in my religion, seiðr, is black magic (no matter how it’s whitewashed by modern writers). And I practice it. I revel in it. And the people I targeted are going to have their lives ruined, or ended, if I did it right. And good. Because they were enemies.

Enemies aren’t to be respected. They’re not to be turned into friends. They’re not just misunderstood, and they’re not just the products of their environment. They are enemies; enemies of me, or my family, or my tribe. And they deserve to be destroyed. Ruined. Obliterated. And I’m okay with that. More than okay. I actively try to make that happen. My religion says “go for it!”

Mine is a religion that isn’t just okay with war and battle. It embraces battle. The highest honor one can receive is to be taken up to Valhalla to dwell with Odin until the final battle. And how do you get there? You’re a kick-ass warrior who dies in battle fighting your enemies and the valkyries notice you and select you for Valhalla. And what do you do in Valhalla until Ragnarok? You hone your warrior skills by fighting, each and every day, sometimes dying and then being raised again so you can fight tomorrow.

Odin needs warriors at the final battle against Loki and the Jotuns, not peace-makers, not couch potatoes, and not pacifists. That’s my religion.