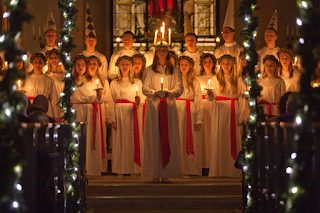 St. Lucy’s Day, better known in Scandinavian circles as St. Lucia’s Day, is a Christian feast day celebrated today on December 13. Before the conversion from the Julian to the Gregorian calendar, however, it was associated with the winter solstice (as they knew it, the longest night of the year).

St. Lucy was originally Sicilian, and martyred in 304 CE. She quickly became a very popular saint, and her feast day was honored at least by the 6th century in Anglo-Saxon England. In southern Europe, she is associated with grain, and there is a later (16th century) tradition of her eyes being gouged out; neither of these attributes is particularly associated with her northern European incarnation. 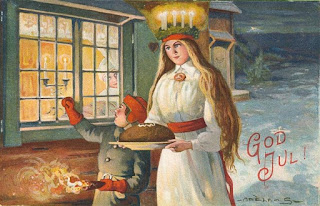 It is quite telling that in very Lutheran (Protestant) Sweden, the celebration of St. Lucia’s Day has survived and thrived. The image of young blonde girls with crowns of greenery and candles is iconic, and has been exported to the surrounding nations (Finland, Norway, and Denmark) within the last century or so. Here, the tradition holds that the saint was helping Christians hiding in the catacombs, and put candles on her head to be able to hold more food in her hands. This doesn’t seem to be a tale originally associated with her in southern Europe; it could be a “retro-fit” to explain her explicit connection with light in northern Europe, and in any event the crown of candles isn’t attested until 1820, so it’s likely a modern invention based on an earlier association with light in general (appropriate for the solstice-based celebration).

However, it is important to note that St. Lucy’s story is probably not historical; even the Catholic Encyclopedia agrees that:

This beautiful story cannot unfortunately be accepted without criticism. The details may be only a repetition of similar accounts of a virgin martyr’s life and death. Moreover, the prophecy was not realized, if it required that Maximian should die immediately after the termination of his reign. Paschasius, also, is a strange name for a pagan to bear. … and it is to be hoped that these [miracles she is said to have done] have not been introduced by the pious compiler of the saint’s story or a popular instinct to link together two national saints. The story, such as we have given it, is to be traced back to the Acta, and these probably belong to the fifth century. Though they cannot be regarded as accurate, there can be no doubt of the great veneration that was shown to St. Lucy by the early church. (Emphasis added)

Since they seem to have just imposed a generic female saint “template” on the figure of Lucy, it seems likely that the celebrations around her were already there, and they were simply trying to impose a Christian veneer on these practices.

And the celebration of St. Lucia in Sweden is marked with songs, and a young girl being selected to play the role of Lucy, wearing a crown of lingonberry greens and seven white candles (in modern times, these are usually electric, rather than real flames). She is at the center of a procession of children singing songs and holding food (special cakes) and drink. (Some traditions hold that if you hear the sound of the Wild Hunt behind you, you should toss one of the cakes, called lussekatter, over your shoulder to appease them.)

Native Swedish lyrics with a Neopolitan melody, and still beautiful

So far we have:

Still doesn’t seem definitive, although it’s certainly suggestive. And who would be the most logical choice to celebrate on the shortest day of the year? The goddess Sunna, as a way of urging her to elude the wolf (or be reborn after the wolf consumes her) through sympathetic magic. 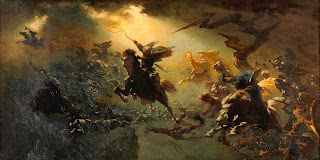 However, there’s another piece of the puzzle; the witch-like figure Lussi (or, more rarely, the male Lussigubben). Lussi is a Scandinavian figure, closely parallel to the southern German Holle or Perchta, Lussinatta is the traditional start of the Wild Hunt, or as it’s called in context with her, lussiferda (it has different names in different locations, and the details vary; we’ll discuss the Wild Hunt in particular in its own post). All the work of the household to prepare for the coming winter is to be complete by Lussinatta, lest the lazy households who haven’t gotten their chores done be punished (again, parallels with Holle and Perchta). 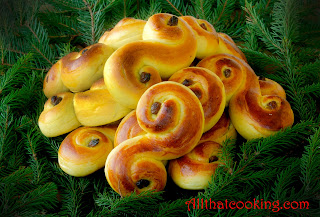 There is also a tradition known as lussivaka, which is an all-night vigil on the night of the solstice, along with a feast, to keep an eye out for the lussiferda flying by. In modern times, this takes the form of an all-night party, which traditionally breaks up at dawn. There are also reports from the 18th century of offerings of food being left outside on the Lussinatta, probably to appease the troupe of trolls led by Lussi; this is doubtless related to the above-referenced custom of tossing the lussekatter saffron buns over your shoulder to elude the hunt. A recipe for the buns can be found here.

So here, I think, we can really start to fill in some details. We have a confluence of several traditions (or, perhaps like we see with Nicholas/Krampus, a mixed tradition to start with). First, we have a celebration of the sun goddess, Sunna, on the longest night of the year, in order to help her through her weakest time. A vigil is held overnight, in order to make sure she returns through this darkest time. 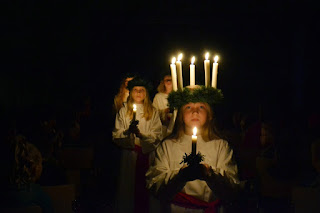 Second, we have the appearance of Lussi, who exhorts the people to have their chores done in preparation for the long winter, just as we see in southern Germany with Perchta and Holla. In some ways, there are a lot of parallels between such figures and the goddess Frigg, whose domain over the domestic household has long been established.

Third, we have the appearance of the Wild Hunt, in the form of the lussiferda, which sticks around until the celebration of Yule (which would happen in mid-January). During this time, it is hazardous to be out and about at night, lest the hunt seize the unwary traveler, and on its first night of appearance, offerings are left outside (to distract the hunt from finding the sun goddess???).

And of course, in keeping with the methodology of orienting everything around the solar-defined solstice, rather than the calendar-defined Christmas, we would place this observance on or around December 21st, conveniently mapping very well with the conversion from the Julian to the Gregorian calendar.

HELPFUL PLANNING TIP: If you’re planning an all-night lussivaka party, now’s the time to send out the invitations.

9 thoughts on “Lussinatta: Celebrating the Light”